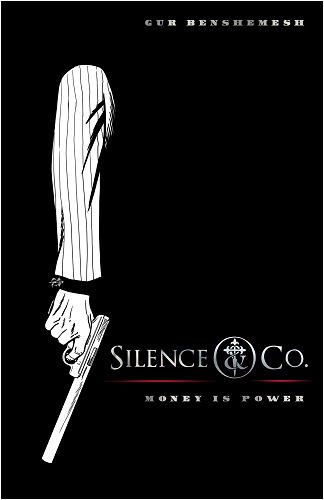 This black and white crime book follows the exploits of Alex Marazano, hitman for the Marazano mafia, fresh from his most recent job and ordered to take some time off abroad.  While there he runs into an offer from a previously unknown but highly recommended outfit.  Things don’t go as planned, tables are turned, a dame gets involved, and to tell any more would be spoiling it.  What originally drew me to this work was the Ron Randall art, but seeing lettering by John Workman didn’t hurt either.  I was previously unaware of Crystal Productions and the author Gur Benshemesh (also credited with “produced by”).

I enjoy crime comic books from time to time and I recognize that the genre conventions can feel constraining for some.  Our protagonist is a top notch hitman; it always seems that these books focus on characters with superlative skills in their respective professions.  I guess if our hero was a bungling criminal, he would never live long enough to have his story told.  Also as typical, Alex has a set of rules that he follows for every job.  This allows for tension when he takes that job where his gut tells him to walk away.  We also get a gal with great gams and plenty of gunplay.  This is one where the “hero” is bored of plying his wares but continues to do so out of sense of duty to the family which sets the character up for the inevitable change in his status quo.

One of the strengths of this book is some of the logistical details provided regarding surveillance and other elements of crime/crime prevention.  In some ways, the narration is reminiscent of the television show Burn Notice providing the reader/watcher with detailed information explaining spycraft.  I also think the twists are reasonably designed, particularly the nature of the entity that comes to employ the hitman.    Those twists and turns keep this book a page turner, but like many of these books, it does not pay many dividends to think too hard about them, for example his rules for behavior towards “civilians” seem more driven by the necessities of the story.

Ron Randall (creator of Trekker but also know for comics work on a number of series from DC and Dark Horse) delivers really solid art.  He is able to convey the action scenes with necessary clarity and is able to communicate mood and emotions of the distinct characters in the book.  We have a relatively small cast considering the scope of the crimes involved but ably handled.  If you like Randall’s previous work, this is right in line, unless of course you do not like black and white comics.  I have a soft spot for black and white art but hopefully not to the extent that it created a bias.

It seems a little strange to use the word “fun” to describe comics about a contract killer but fun is what is provided here.  There is plenty of on-panel, explicit violence, and bad language but only suggestive sexual content if any of those things are important.   If you like crime books and the black & white art is not a problem, I would recommend this book to you.

The goal of ComicSpectrum is to provide a one-stop reference for everything about & related to comics and comics culture.
View all posts by comicspectrum →
This entry was posted in Crystal Productions and tagged B&W, comic, Crime, Hitman, Noir, Ron Randall. Bookmark the permalink.