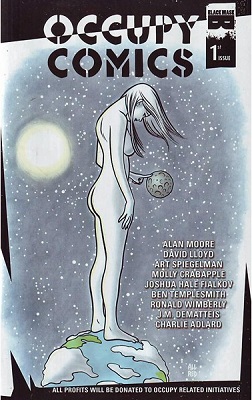 Rating: 4/5 – Anthology of established pros with a perspective

Comics tend to be an oddly segregated medium with webcomics over here, Marvel, DC and other LCS fodder over there, and mini comics somewhere else.  At Comic Spectrum we have tried to provide coverage of these various aspects.  This anthology represents a bit of departure as we have a mostly regular crew of LCS favorite creators in a book with an overtly political bent.  The “Art Spiegelman” credit does give us a hint that we might be straying from the capes and cowls but his contribution to this is a single illustration.  I am already on record as enjoying anthologies, and this is no exception.  With these established creators, this was an easy comic to buy.  This is a bit more of grab bag as the Alan Moore contribution is a text piece, along with another very text heavy item and several of the contributors just do a single page image.  Not that the form of these contributions is a problem, as I feel the format is not a barrier to the successful integration of those elements but some people don’t want text pieces in their comics.

This anthology began life as a Kickstarter campaign back in Nov-Dec 2011 when the Occupy movement was in full swing and regularly in the news.  It obviously has an axe to grind which provides a flow to the book.  I can certainly understand if one is reluctant to provide resources to a political movement but at $3.50 an issue, I am not sure what sort of “profits” can be expected from this book (though the production costs should have been covered by the Kickstarter way back when).  Perhaps I should not be so cynical so soon in this review.  I enjoy exposure to a variety of viewpoints, particularly when they are upfront about their perspective and it’s not snuck in under the guise of being objective.  I also think this is something that is generally missing from the LCS shelves.  There are plenty of “art” comics with a political viewpoint, likewise with mini-comics, webcomics, and other avenues, but it is more rare to find that nestled between the pages of a super-hero title.

While this book is not light in content, there might be a few too many single page contributions to this first issue.  At a minimum, the Alan Moore text piece provides a history of cartoons stretching back to Egyptian times.  I have read a few histories of the comic book and most of them start from the Yellow Kid and move forward so it was very illuminating to see some of the historical antecedents.  The Fialkov/Infurnari piece stands out with distinctive visual and historical approach.  The order of the pieces also provides a logical and thoughtful transition from one piece to the next.  Some of the pieces are more subtle than others.

Because the anthology presents itself straightforwardly, the arguments linger after I finished the book to see where I agreed, disagreed or was unfamiliar.  “Casino Nation” gives paragraph summaries of some of the major players involved in the recent housing bubble and subsequent collapse.  Not sure if such a cursory treatment is adequate to the situation but I admire the effort.  While a history piece like Moore’s flows, I think one would be better with a text, non-fiction book such as All the Devils are Here by McLean and Nocera to get a broader view of the interplay of the recent financial events.  Still I encourage commenters to set me correct or provide alternate resources.  Both Casino Nation and Moore’s piece indicate that they are part 1 so presumably to be continued in subsequent issues.

Assuming the political nature does not turn you off, I would not hesitate to suggest you check out this anthology.  At a minimum, this is a well executed book by established professionals.  Unfortunately with new publishers, there is some risk that this book will not end up at your LCS.  Assuming I can continue to get this book I will.

The goal of ComicSpectrum is to provide a one-stop reference for everything about & related to comics and comics culture.
View all posts by comicspectrum →
This entry was posted in Black Mask and tagged Black Mask, Kickstarter, Occupy Comics. Bookmark the permalink.