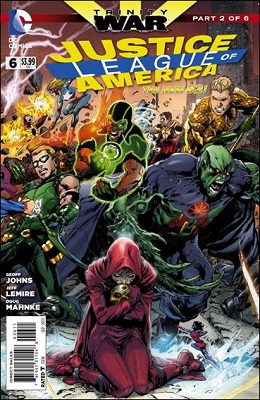 Rating: 3.5/5 – A small step back from the opening chapter

In Justice League of America 6, the Trinity War continues.  This is the second part of the crossover that started in Justice League and will head into Justice League Dark for part three.  After the strong opening in part one of this crossover, part two unfortunately doesn’t carry that same momentum.  That’s not to say that the book wasn’t enjoyable, it just didn’t live up to the non stop action and pace from the opening chapter.

Part two picks up right where the action left off after Justice League 22 with Superman surrendering to the JLA team for his role in the death of a long-standing DC villain.  The majority of the book deals with how team members from both Justice League teams react to Superman’s actions and incarceration.  This approach to the story slows down the action and the pace that we got in part one, to just a couple story beats in this issue.  Because of that, this issue leaves you wanting a bit more.  Although I expected the storyline to slow down a bit, I didn’t expect it to slow down this quickly.  Before the issue’s conclusion though we get to see Wonder Woman investigating the origins of Pandora’s Box, as well as the setup for the inclusion of the Justice League Dark in the third chapter.

In regards to the art, Doug Mahnke’s pencils are amazing, but depending on who’s inking, the art can be a bit of a let down at times.  If you’re familiar with Mahnke’s art on Green Lantern, then you’ll most likely remember his art being inked by Christian Alamy.  Unfortunately Alamy’s inks are not throughout the entire issue.  Inking chores are shared by Keith Champagne and Tom Nguyen as well as Mahnke himself.  It’s not to say that their inking over Mahnkes pencils are bad, its just a less clean style than Alamy’s, and it’s a noticeable difference from one page to the next.  Having four different inkers in one issue doesn’t keep the same consistency throughout.  Again, Mahnke’s art is a sight to see, it’s just unfortunate to see it with so many different inking styles over it.

Overall this crossover is still keeping me interested, even though this second part was not as strong.  I’ll be curious to see if Justice League Dark will be able to pick the pace back up, or if the story takes another step back.  Let’s hope this crossover doesn’t lose steam and we can get back to the same caliber of storytelling as we did in part one.

The goal of ComicSpectrum is to provide a one-stop reference for everything about & related to comics and comics culture.
View all posts by comicspectrum →
This entry was posted in DC and tagged Batman, Christian Alamy, DC Comics, Doug Mahnke, Geoff Johns, Jeff Lemire, Justice League, New 52, Superman, Trinity War, Wonder Woman. Bookmark the permalink.