Posted on September 4, 2013 by comicspectrum 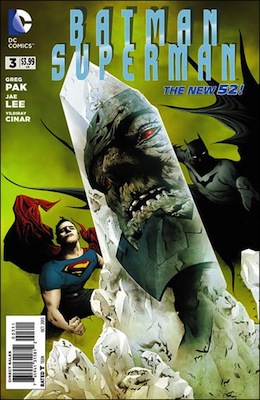 Rating: 3/5 – This issue falls short of the potential

After three issues there are still a lot of questions to be answered, and unfortunately I’m not sure if I want to keep staying around to find them out.  Batman Superman number three has all the makings of a great book; two versions of Batman and Superman, a guest starring Wonder Woman, and finally an appearance by Darkseid…it should work.  Unfortunately it doesn’t.  Excluding a great scene detailing a boyhood matchup of Bruce and Clark (the reason this books gets a 3 out of 5), this issue falls short of the potential.

This story picks up right where issue two left off, with Wonder Woman’s spear through Lois Lanes’ chest.  This releases Kaiyo the trickster god from Lois’ body, which leads to Superman having to use his heat vision to perform “cellular reconstruction” on Lois’ wound.  Obviously a new power for Superman, but this is the Earth 2 Superman, so he’s constantly surprising the younger New 52 Superman, both good and bad.  From that opening scene we see the multiple Earth Batman and Superman interacting with each other to fight the trickster god, there’s an investigation into why the NSA is hiding a potential weapon to take down Superman, and Darkseid is up to something, just not sure what that something is.  And that’s the problem.  Not having all the answers to questions within the first couple issues is ok, but not knowing the motivation behind the main villain, or now Darkseid before the conclusion next issue is frustrating.

The highlight of the issue though is an interaction between Clark and Bruce.  After Alfred and Bruce’s car breaks down in Smallville, Alfred takes a little bit more time to fix it so that Bruce can play some baseball and have some much needed fun.  It’s a charming scene that takes advantage of the art style of Yildiray Cinar to make it work.  It’s a necessary departure from Jae Lee’s dramatic and thin line.  Cinar’s art softens Bruce and Clark’s young features and gives needed backgrounds and detail to Smallville.  Although I was a fan of Lee’s art in the first issue, his lack of backgrounds in this issue is noticeable.  It’s as if the entire issue took place in a cloudy void.  His character poses are absolutely stunning, but they do come across as stiff and posed with the amount of action that takes place in this issue.

One more issue and this first storyline will wrap up.  Although the cliffhanger on the last page is intriguing, I’m not sure if after these first three issues I still care.  For a book that has so much potential, hopefully this creative team can wrap up this story in grand fashion, and make all the different pieces work together.

The goal of ComicSpectrum is to provide a one-stop reference for everything about & related to comics and comics culture.
View all posts by comicspectrum →
This entry was posted in DC and tagged Batman, Batman/Superman, Darkseid, DC, Greg Pak, Jae Lee, New 52, Superman, Wonder Woman, Yildiray Cinar. Bookmark the permalink.