Guardians of the Galaxy #7 (Marvel) 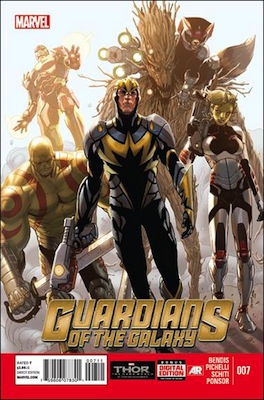 Rating: 3/5 – More on Angela, less about the Guardians.

Writer Brian Michael Bendis and artist Sara Pichelli give us a little bit more depth into Angela and her motivations in this dialogue heavy and action free issue of Guardians of the Galaxy.  As is typical of Bendis books, the dialogue in issue seven is strong.  That being said, with such a strong focus around Angela, I’d like to see the story focus more on the Guardians of the Galaxy characters.  I’m afraid with this issue they take a back seat to Angela’s inclusion into the book.

As mentioned above, there’s no action except for a flashback sequence to where we see Angela appear for the first time in the conclusion to the Age of Ultron storyline.  The issue revolves mostly around an interrogation of Angela after being captured in the previous issue after her skirmish with Gamora.  It’s during this interrogation that we see some snippets of Angela’s origin, and hints as to where her story will take this team next.  The dialogue flows nicely, the characters come off sounding real, and of course there’s a bit of humor.  That being said, we still have yet to see a lot of Drax in this series, Iron Man seems to be a small time player on this team, and Rocket Raccoon always deserves more scenes.  Focusing more on the main characters of the core team would make me enjoy this book more.

Sara Pichelli’s art is strong as usual, but with the lack of action she isn’t challenged by this issue.  Except for a scene that shows Angela’s home world, nothing about the art stood out.  It wasn’t that it was bad, it’s just that the story didn’t allow for a lot of dynamic and interesting scenes for her to draw.

Overall I felt as though this was an average issue, and this series continues to have its ups and downs.  I’d like to see Bendis move a little more quickly with Angela’s origin so he can focus on telling stories with the characters that headline the book.

The goal of ComicSpectrum is to provide a one-stop reference for everything about & related to comics and comics culture.
View all posts by comicspectrum →
This entry was posted in Marvel and tagged Angela, Brian Michael Bendis, comic books, comics, Guardians of the Galaxy, Marvel, Marvel Now, Sara Pichelli. Bookmark the permalink.

2 Responses to Guardians of the Galaxy #7 (Marvel)