Posted on November 28, 2013 by comicspectrum 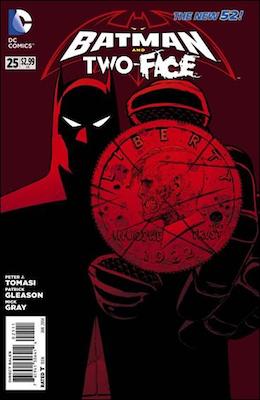 I’m a big fan of the creative team of Peter Tomasi and Patrick Gleason.  I think that they’re one of the more underrated writer/artist combinations out there.  They did some amazing work on the Green Lantern Corps together prior to the New 52 launch, and have now produced over twenty issues of Batman and Robin together.  Although at times this series has not always been great, it’s always been solid writing with outstanding art.  This time both the writing and art are equally as good as Tomasi and Gleason explore the New 52 origin of Two Face.

Let’s start with the art.  I’ve said it before in prior reviews, but I’m a huge fan of Patrick Gleason’s work.  He does the creepy so well as he takes the time to add so many fine details, even while using heavy blacks.  He’s able to draw actions scenes that have a great dynamic range to them and he’s able to make you feel the violence.  His portrayal of the violence can be a bit graphic at times, but it always adds to the work and never feels gratuitous.  His art is a perfect fit for Two-Face as he shows the scars in great detail and actually makes him look scary.  Although we don’t get to see Two-Face too much in this particular issue, this storyline is a great match to his talent.  Also, the cover on this issue is just fantastic.  It’s a great mixture of both the graphic portrayal of Two-Face, and an almost animated rendition of Batman colored brilliantly by Mick Gray.  He’s able to make both styles fit so well together.

This issue’s story continues the tale of Two-Face’s origin which is quite different than it previously was.  It’s a more violent and tragic story than the original, but feels fresh, modern, and introduces a new character into the story.  That character is Erin McKillen.  This issue revolves more around her, her motivations, and the ramifications of her going after Harvey Dent.  She’s not a like-able character and Tomasi never makes you feel for her.  It’s an exciting story that has Batman trying to protect her from Two-Face as both of them are so driven enacting their revenge on one another.  Except for the ending which doesn’t seem to fit Batman’s style, I’ve loved every moment of this story so far.

I highly recommend you give this issue a try, but you’ll need to read issue twenty-four to enjoy this issue.  So far this is a great re-telling of Two-Face’s origin, done by one of the DC’s best and most underrated creative teams.

The goal of ComicSpectrum is to provide a one-stop reference for everything about & related to comics and comics culture.
View all posts by comicspectrum →
This entry was posted in DC and tagged Batman and Robin, Batman and Two-Face, comic books, comics, DC Comics, New 52, Patrick Gleason, Peter Tomasi, Two Face. Bookmark the permalink.