Posted on November 30, 2013 by comicspectrum 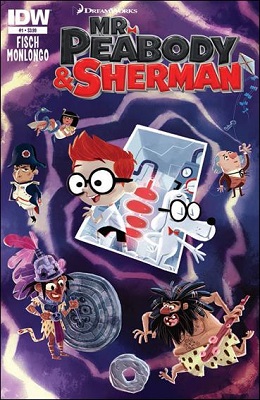 Sholly Fisch is a treasure.  He writes a LOT of what some would call “kids comics” but that I’ll distinguish as All Ages because of the way Fisch writes that makes them fun for kids and adults too.  I’ve read lots of comics that are designated as All Ages that really seemed like they were shooting for a lowest common denominator and being written down to a young audience.  Fisch avoids that, giving interesting facts about Mayans as well as sprinkling in some really fun pop culture references that likely will go right over kids heads, but were tremendous fun for me.  BUT, and this is important, those references are subtle, don’t interfere with the story, and do not detract from the reading enjoyment if you miss them.  They’re a pure addition to those who notice them.

This comic likely exists to capitalize on the Dreamworks film coming out in March 2014, but it’s also a fun throwback to the wonderful Jay Ward cartoons that aired as part of the Rocky & Bullwinkle show in the 1960s AND also stands just fine on it’s own since Fisch sets up the whole story starting at square one right here in this issue.

For those unfamiliar with the characters, Mr. Peabody is a genius who also happens to be a dog.   Along the way, he decides that if a boy can have a dog, a dog can have a boy and adopts Sherman.  They have adventures through history using the time machine Mr. Peabody invented called the WABAC (pronounced way-back) machine.

Bravo!  This is a great comic from start to finish, I’m going to be back for #2 and beyond.  I needed a “fun injection” into my monthly comics reading!

The goal of ComicSpectrum is to provide a one-stop reference for everything about & related to comics and comics culture.
View all posts by comicspectrum →
This entry was posted in All Ages Comics, IDW and tagged comic books, comics, idw, Mr. Peabody, Sherman, Sholly Fisch, time travel, WABAC. Bookmark the permalink.