Posted on December 8, 2013 by comicspectrum 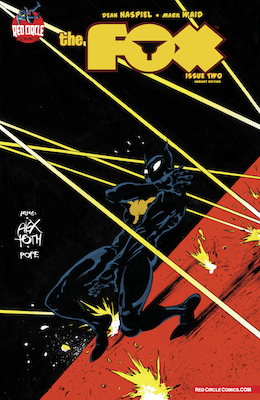 Rating: 4/5 – Another strong premiere, this time by The Shield!

After reading and reviewing the first issue of the Fox I was excited for this new series, and excited for Dean Haspiel and Mark Waid to bring back some of the Red Circle characters.  The first issue was a fun and charming read, and this second issue takes that same formula and adds a bit of the strange to tell a fun and exciting tale.  Not only that, but we also get to see a backup story starring the Shield, which was surprisingly better than the lead story and that’s saying something!

In the main story, the Fox enters the Diamond Realm in order to help the Queen of Diamonds save the realm and her husband, who’s being forced against his will to kill his own people by the villain known as the Druid.  It sounds like a silver age story and it feels that way too…in the best way.  The Queen of Diamonds has a weird way of speaking so at times you’ll have to read some passages twice in order to understand her, but that’s all part of the charm.  Artist Dean Haspiel’s work on this issue tops the first as he includes all sorts of different characters and crazy landscapes in his cartoony and colorful style.  It’s a pleasure to look at these pages as Haspiel puts his stamp on this character.

The backup tale starring the Shield is written by J.M. DeMatteis and pencilled by Mike Cavallaro.  The writing in this story is so strong and where the lead story is fun and charming, this one takes a fun, but more serious approach.  It starts with the Shield recounting a mission set in World War II starring monsters and super villains.  What makes the story so strong is the way DeMatteis write’s Shield’s personality.  He feels fear so he feels human, even in the super-human setting.  That super-human setting has a Kirby feel to it as artist Mike Cavallaro is a great fit for the story they’re telling.  And opposite of the lead story with the Fox, this story feels more silver age in the art than it does with the story.

Two great stories with a Paul Pope cover…how can you go wrong.  Archie comics has had two of the more enjoyable series to premiere in the second half of this year (The Fox and Afterlife with Archie).  I’m hooked on this series now, not just for The Fox, but for The Shield as well.  If you give this series a try, I’m sure you’ll be hooked as well.

The goal of ComicSpectrum is to provide a one-stop reference for everything about & related to comics and comics culture.
View all posts by comicspectrum →
This entry was posted in Archie and tagged Archie Comics, comic books, comics, Dean Haspiel, J.M. DeMatteis, Mark Waid, Mike Cavallaro, Red Circle Comics, The Fox, The Shield. Bookmark the permalink.