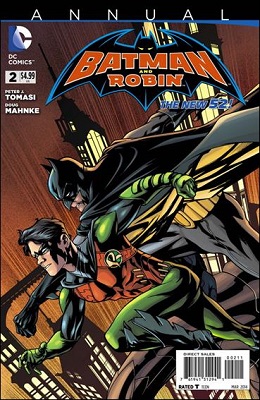 Writer Peter Tomasi tells an excellent story about the first week of Dick Grayson as Robin. This is a story full of nostalgia; it’s a reminder of why we all love Dick Grayson. This story expands and tells more about Batman’s past, an element that was previously lacking for the New 52 Batman, despite his many ongoing titles.

The story was told from a different angle- Nightwing’s take on his adventures with the caped crusader. Instead of the story being the grim and gritty story you’d expect from a regular Batman story, it’s quite different and refreshing. Of course, It does have some dark stuff going on- this IS a Batman story after all, but reading the story from Dick’s point of view was very entertaining. The story itself was an interesting take on Dick Grayson’s character. The interactions between him, Bruce and Alfred allowed for some very engaging dialog that kept the story moving. I really enjoyed how the book tied into Damien Wayne. It was nice seeing him again and the end of the book served as sort of a farewell to him with a nice touch I won’t spoil.

The art by Doug Mahnke is nicely done and really matches the characters and the tone set by the story. The facial expressions are spectacular. The redesign of Dick Grayson Robin’s suit was great. It introduced a new take on his classic look and the suit looked great on Robin. On the down side, the background detail was generally dull and lacking any sense of depth, Mahnke could have done a much better job here.

Batman and Robin Annual #2 is a must read for any Dick Grayson Robin fan. The book heavily relies on the nostalgia factor and it pays off- I haven’t read a Robin story in a while and this story filled the void that existed in me for this kind of story.  The timing of the book’s release is unmistakable- right before the end of Forever Evil, who knows what will happen with Dick Grayson after that event?  Whatever happens, we’ve got this great story about Dick right here and now.

The goal of ComicSpectrum is to provide a one-stop reference for everything about & related to comics and comics culture.
View all posts by comicspectrum →
This entry was posted in DC and tagged Batman, Batman & Robin, comic book, comics, DC Comics, Dick Grayson, Doug Mahnke, New52, Peter Tomasi, Robin. Bookmark the permalink.