Posted on February 6, 2014 by comicspectrum 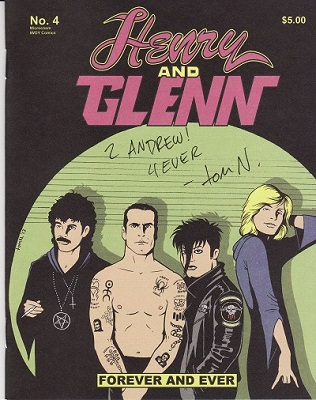 At the recent LA Art Book Fair, I happened to pick up a copy of the latest Henry And Glenn Forever and Ever comic book from Tom Neely himself.  I had the first collection, Henry and Glenn Forever, but did not realize the series had continued with a second volume, the Forever and Ever series.  This series follows fictionalized accounts of two real life musicians, Henry Rollins and Glenn Danzig, re-imagined as a gay couple lifted right out of a newspaper strip.  In fact Glenn is drawn in a style right from Little Lulu.  If you are unfamiliar with the rockers, then much of these books will likely be lost on you as not only are there a plethora of in-jokes based on their songs but their images as public figures as twisted in the typical domestic couple with Glenn being the one with all the crazy plans and Henry being the calm, more deliberate one.  Their neighbors are a Satanist Hall and Oates, the pop duo, whose image as pop musicians is contrasted with the portrayal as Satanists.

The book is smaller digest proportions and is in black and white.  While the subject matter involves Satan and death, the tone is kept light and silly, like a TV sitcom with jokes and gags crammed into every panel.  While this was the fourth chapter, I was able to pick up the story very quickly.  Glenn wants to get rid of his mother, and had concocted a plan to convince her that alien zombies have landed but she just ends up wanting to meet them.  Glenn had inadvertently summoned real zombies in an earlier attempt to invoke Satan.  A massive battle breaks out.  To save the day, Satan is called in but I will leave the button to the story unanswered here.  As you might imagine the plot is not the big seller here.  The main story is done by Tom Neely who is part a group Igloo Tornado.  Naoh VanSciver, Keenan Marshal Keller, Cristian Collantes contribute back-up features and Johnny Ryan has the back cover cartoon but using Gary Newman and Mark Mothersbaugh (Devo) as the pairing.  The main feature is the one most to my liking but we also get tales of them by the other contributors fighting giant lizards and have space adventures.

To my thinking, Neely’s works the best because of the quaint vulnerability that he invests in the characters.  They may have their sights set on rock and roll and Satan but it is their love that grounds them.  There is a one page strip on Henry (the larger of the two) carrying Glenn with a riff on the saying about Jesus carrying a person.  Additionally his art style perfectly captures the bygone era when newspaper strips were vital and held in high esteem.

Initially I was unsure how much mileage could be weaved out of the original concept but this concluding chapter of the second volume stands up to the first one.  I would probably advise checking out that first volume to see if this is your cup of tea.  If the series continues, I will likely grab another issue.

The goal of ComicSpectrum is to provide a one-stop reference for everything about & related to comics and comics culture.
View all posts by comicspectrum →
This entry was posted in Small Press and tagged Glenn Danzig, Hall and Oates, Henry And Glenn Forever and Ever, Henry Rollins, LGBT, Satan, Satanist, Tom Neely, zombies. Bookmark the permalink.