You Are Not Alone v1 OGN (GrayHaven Comics)

Posted on February 27, 2014 by comicspectrum 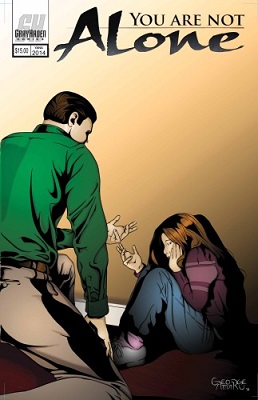 Anti-Bullying is the running thread through this hefty anthology.  It features established creators side by side with newer, unfamiliar names.  At 180 pages and given the sheer number of creators involved, I will not be listing everyone involved.  The book is further divided into sub-categories of Depression/Suicide, Homophobia, Racism, Abuse, Violence and Bullying.  Separating the sections is a page listing available resources to provide assistance with the associated issue, which is definitely a nice touch.  Comics as agitprop most readily bring the association of Jack Chick’s “Chick Tracts” containing religious exhortations to find salvation through belief.   You Are Not Alone was originally financed via Kickstarter and comes in at 180 pages but is now available directly from the publisher via their website.

I should rightly state that I am in favor of the positions advocated, but it is probably the rare reviewer that would come out in favor of racism, abuse, etc.  The subsections are loosely interpreted but all the stories are kept short.  It can be a bit of brutal experience reading through the entire anthology in one sitting due to the nature of the material.  I would think one would have to have a stone heart to not have at least a few them touch the reader.  Conversely because of the variety of styles, I can’t imagine anyone finding every story to their taste.  This is a black and white comic and has a definite small press comic book feel to most of the art.

So dear reader, you have cleverly noted that this review has told you what this book is about but has been silent on specifics and I cannot refute this observation.  Given the volume and range of the four page stories, they washed over me as a reader without a clear consistent takeaway.  Certain stories linger in my mind but I think given the nature of the volume, each person is best suited to experience these on their own.  If you are intrigued by the topic and have a love of the small press side of indie comics, that should be enough of a lure.  My personal preference would have been longer stories, albeit fewer of them.  To counter my own argument, for topics like depression, there is something to the idea of trying to convey the emotion of it through the art as opposed to having the narrative drive the piece. So by having many different short pieces it increases that chance of connection.  I would think this would be a great book for a young person, particularly one dealing with bullying, but obviously there are very serious themes present that might be counter to some people’s notions of what is age appropriate so informed guidance is advised before giving to young readers.

The goal of ComicSpectrum is to provide a one-stop reference for everything about & related to comics and comics culture.
View all posts by comicspectrum →
This entry was posted in Small Press and tagged Anthology, Bullying, comics, GrayHaven Comics, OGN, You Are Not Alone. Bookmark the permalink.

2 Responses to You Are Not Alone v1 OGN (GrayHaven Comics)