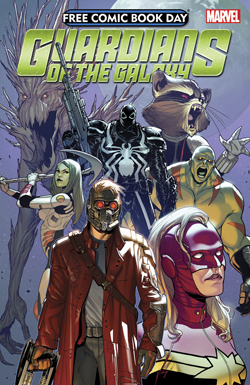 Rating: 3/5 – A lack of focus makes this a weaker FCBD issue.
by ComicSpectrum reviewer Shawn Hoklas.

Marvel is unsurprisingly putting a lot of attention towards the Guardians of the Galaxy with the movie coming out in just a few months. For Free Comic Book Day Marvel has not only one, but two entries focusing on the team, or its characters. While the Rocket Raccoon issue is geared towards a much younger audience, the Guardians of the Galaxy book is designed for the more mature reader. While the Guardians are the main focus of the book, there’s also a preview of Jim Starlin’s upcoming Thanos Graphic novel, and a prequel of sorts to a Spider-Man story titled Spider-verse.

The first ten pages of this issue is a new and original story starring the Guardians of the Galaxy by Brian Michael Bendis and Nick Bradshaw. After reviewing the recent Anniversary issue of the Guardians, I had mentioned that there was no back story on how or why Venom had joined the team. Well, that story is laid out here. It’s a bit strange with the timing of these two issues, and those who miss out on this FCBD book may never get to see this story. But, this ten page tale is clearly a showcase for the characters and is designed to attract new readers. It’s a shame that it’s only ten pages though since it doesn’t feel like a complete story. When compared to DC’s FCBD book Future’s End, it’s somewhat of a disappointment.

The preview pages for Starlin’s graphic novel called Infinity Revelation is a smart move by Marvel by putting the attention on Thanos, who fits so well into the cosmic side of the Marvel Universe. The book is due out in August so the timing is right. The inclusion of the Spider-Man preview did have me questioning Marvel’s decision to include it in this issue. There’s little relation to the other two stories, and although the story will continue on in a series called Spider-verse, that won’t be releasing until November. Marvel could have focused on their cosmic characters throughout the entire issue, but by spreading their focus too thin the overall package suffered.

The goal of ComicSpectrum is to provide a one-stop reference for everything about & related to comics and comics culture.
View all posts by comicspectrum →
This entry was posted in Marvel and tagged Brian Michael Bendis, comic book, comics, Dan Slott, Free Comic Book Day, Guardians of the Galaxy, Jim Starlin. FCBD, Marvel, Nick Bradshaw, Spider-Man, Thanos. Bookmark the permalink.