There were quite a few comics targeted at younger readers this year.  I won’t hit all of the kid-centered (or all ages) ones but I’ll highlight 12 of what I thought were the best in 3 parts, the 1st 4 are here and I’ll get to the other 8 in a day or two.  As adult fans I think we often forget about kids and reading that is geared at bringing the younger readers into the fold as comic fans.  Fortunately there are a lot of publishers out there who are dedicated to putting out great comics geared at younger readers (and those are often able to be enjoyed by adults too!).  Get some of these comics for kids in your life, your kids or friends kids.  Make comic readers out of them, it’s never too early to start!

Mouse Guard, Labyrinth and Other Stories (Archaia)
Rating: 5/5 – This Hardcover is the Crown Jewel of FCBD!
by ComicSpectrum EiC Bob Bretall.

Archaia changed the playing field for Free Comic Book Day in 2012 when they published the first free hardcover comic (also an anthology anchored by Mouse Guard).  They set a bar that year and it was a big disappointment to fans when 2013 didn’t feature a second hardcover.  They’ve corrected that this year with hardcover #2 and it’s a doozy.  David Petersen leads off with a Mouse Guard tale featuring the Black Axe, and is rounded out with 5 more stories from the Rust, Labyrinth, Bolivar, Will O’The Wisp, and Farscape franchises.  Great variety, every story strengthened a franchise I was familiar with (Mouse Guard, Rust, Will O’ the Wisop) or made me want to pick up more stories from those I had not already been reading.  These are some great stories that you can read to your kids, with your kids, or give to kids to read for themselves (with the exception of Farscape, which was a good story, but didn’t really seem to be particularly kid focused, more of a tale for people into the sci-fi TV series).

Avatar is a super popular cartoon series and these new comic tales are the perfect fare for bringing TV fans into the comic book fold to get new stories about their favorite characters.  Story and art are both excellently executed .  We get an “Itty Bitty Hellboy” story by Art Baltazar and Franco which is delightful and makes Hellboy kid friendly.  Baltazar & Franco should get some kind of lifetime achievement award for pioneering this format of highly entertaining “kidified” versions of “teen and up” characters that can be enjoyed by kids, teens and adult alike.  Finally we get a Juice Squeezers tale by David Lapham.  I must admit that I didn’t really make the kid friendly association immediately when I read the 4 issue series from Dark Horse, but upon reflection, it totally is.   Good stuff here! 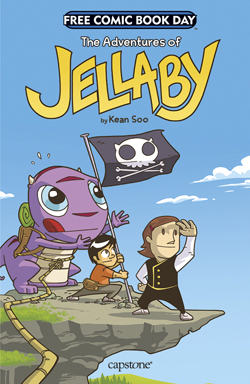 This is a series I’d never heard of before seeing this FCBD book and it’s absolutely charming.  While the pink/purple color palette of the main story really worked for me (reading the interview at the back, the larger collections uses this color palette) I really liked the 2 full color stories in this volume too.  While I don’t see myself sitting down reading these for my own personal enjoyment, I’d read them with or to a kid in a minute.

The stories are short but there are a LOT of them, they showcase the fabulous variety and really solid kid-oriented properties on the kaboom! roster: Herobear & The Kid, Adventure Time, Steven Universe, Amazing World of Gumball, Uncle Grandpa, The Regular Show, Peanuts, and Garfield!  This is another case where I think kids can be brought into comics by following their favorite TV characters into print.  If the quality is there (and in the case of these comics it definitely is) then there’s a good chance that the world of comics will gain a few new recruits.  Start them out on these titles and in another 10 – 12 years we’ll hopefully have a new crop of readers for the indie books adults are now turning to in ever greater numbers!

The goal of ComicSpectrum is to provide a one-stop reference for everything about & related to comics and comics culture.
View all posts by comicspectrum →
This entry was posted in Archaia, Capstone, Dark Horse, Kaboom! and tagged Archaia, Avatar the Last Airbender, capstone. kaboom!, comic books, comics, Dark Horse, FCBD, Hellboy, Jellaby, Juice Squeezers, Labyrinth, Mouse Guard. Bookmark the permalink.