Sally of the Wasteland #1 (Titan)

Posted on August 7, 2014 by comicspectrum 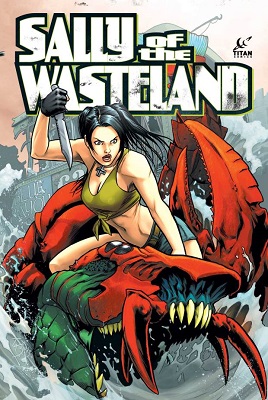 It’s an apocalypse we’re all used to seeing: giant mutant monsters, society devolving into cannibalism, might making right, and of course, women immediately divesting themselves of as much clothing as allowable. Sally of the Wasteland #1 takes this all-too familiar setting and throws in a cast of likeable, if somewhat stereotypical, characters and gives us a time-worn but proven plotline. Yet, for all that, the book manages to be fresh, entertaining, and has me interested and ready for issue #2.

Sally, the titular hero, is the custodian/bouncer at the Bottom Feeder bar, Southern Louisiana’s finest post-apocalyptic watering hole. With her smart mouth, pigtails and somewhat cuckoo demeanor, she reminded me of a certain DC anti-hero whose name rhymes with Barley Gin, but why knock a formula that works, right? Writer Victor Gischler gives her plenty of hilarious dialogue to help the character stand on her own two feet and get a life of her own. Which is good, because she’s surrounded by a cast of characters you’d swear came from other books you’ve read – from the grizzled sea captain to his Ken-doll first mate, from the mysterious stranger who staggers into the bar with an important mission to the aging barkeep who has seen enough of the world – you’ve seen these people before, just maybe not in this particular book.

But don’t hold that against the book. I don’t. True creativity lies in creating something compelling with the tools at hand, and Gischler’s achieved that. Artist Tazio Bettin knows how to draw the female form, with an emphasis on the “…of the Wasteland” part of the title. These people aren’t just smooth edged pretty boys (well, Tommy is, but that’s central to his character). They can crack a joke, kick your ass, and then worry about what mutated animal’s for dinner later. The apocalypse, or “The Fall” as it’s referred to in the book, has left humanity teetering on the precipice. These people, however, give the reader hope that the future might have at least a glimmer of hope. Maybe.

You’ll see a lot of familiar ground being covered in Sally of the Wasteland, unless this is the first piece of literature you’ve ever picked up in your entire life. That it’s as fascinating a read as it is, despite an almost fanatical adherence to tropes and stereotypes, does the book serious credit. I found myself going back over the truly great artwork, and laughing at some of Sally’s better one-liners. Bottom line: I enjoyed this book a lot in spite of the reused elements.

The goal of ComicSpectrum is to provide a one-stop reference for everything about & related to comics and comics culture.
View all posts by comicspectrum →
This entry was posted in Titan and tagged action, apocalypse, humor, Sally of the Wasteland, sexy, Titan Comics, Victor Gischler, violence. Bookmark the permalink.

1 Response to Sally of the Wasteland #1 (Titan)