Posted on November 6, 2014 by comicspectrum 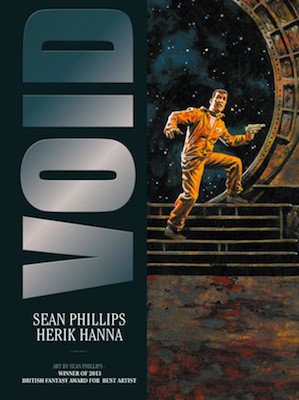 Released a couple months back, Void is an original graphic novel published by Titan Comics. Although you may not be familiar with the writer Herik Hanna, you should be familiar with the artist, the fantastic and versatile Sean Phillips. Together they team up to tell the story of a prison ship that is drifting through the lonely dark void of space. It’s part horror and part psychological suspense with a hefty dose of violence. At times it reads like a modern horror comic, but the ending has some nice twists and turns that feel as though they were inspired by E.C.’s golden age Weird Science title.

After the prison ship the Goliath 1 is struck by a meteor shower, the crew and prisoners aboard are desperately trying to escape with their lives. Unfortunately a killer is on the hunt, refusing to let anyone go. That killer happens to be the commander of the ship, Colonel Mercer. The emptiness and void of space has done damage to not only Mercer’s mind, but is also starting to have effects on the mind of the last survivor and hero of the book named John. As each page goes along, you can feel the tension as Mercer closes in on John and their minds continue to break.

Hanna does a great job of making you feel the dread of being all alone, while at the same time filling the panels with some wonderfully written internal monologue. In one particular scene, John is describing how the meteor storm took down Goliath writing, “a giant defeated by a legion of mindless Davids”. There are nice narrative touches like this throughout this book’s forty-plus pages. Not only will you feel the hopelessness of the situation from the writing, but also through Sean Phillips’ dark and disturbing artwork.

Phillips’ art is fantastic throughout and not only does he have to draw the claustrophobic confines of a ship, but he also has to make you believe in the madness that’s overcoming John. Phillips will draw a gruesome and horrific scene of crewmen being slaughtered with an axe, while later we’ll see John speaking with a talking banana. It all works. During those scenes of madness and throughout this book there’s no structured grid panel layout. Phillips will lay out the panels in different ways on almost every page. Adding to the look of the art are the colors by Hubert. The story is dark, yet so is this world just as it should be. Hubert fills in Phillips blacks with a heavy hand so the Goliath has depth and weight, feeling as though the walls are closing in on John.

Void captured my attention and didn’t let go until the very end. Seeing Phillips’ outstanding art wasn’t surprising considering his track record, but reading Hanna’s story, whose work I was unfamiliar with before, was surprisingly tight and well written. Void will give you a complete story that has a beginning and an end in this OGN and for a hardcover of this quality (larger in height & width than a normal comic) to have a price point of just $9.99 is an absolute steal. Void delivers on story, art, and package so do yourself a favor and don’t let this one fall into the void.

The goal of ComicSpectrum is to provide a one-stop reference for everything about & related to comics and comics culture.
View all posts by comicspectrum →
This entry was posted in Titan and tagged Collected Editions, comic books, comics, Herik Hanna, Hubert, original graphic novel, Sean Phillips, Titan Comics, Void. Bookmark the permalink.