Posted on November 11, 2014 by comicspectrum 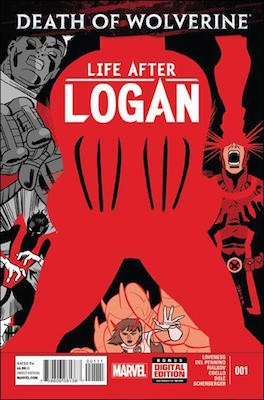 There’s been a lot of tie-ins and follow up to the Death of Wolverine mini-series. We’ve seen the ramifications in Nightcrawler, Wolverine and the X-Men, and even a dedicated series called the Legacy of Logan. Marvel is not letting him go quietly. The Life After Logan one shot is an anthology that explores the effects of Wolverine’s death on some of the characters he’s had the biggest impact on, Cyclops, Nightcrawler and Colossus, and Armor.

The first story titled “You” has writer Jeff Loveness and artist Mario Del Pennino showing how Cyclops is dealing with Wolverine’s death. Loveless does a nice job of describing the rocky relationship they’ve had together, but also highlighting the respect they had for one another as well. Some major events in their relationship are highlighted over the story’s nine pages, and it’s a touching tale with some nice easter eggs thrown in. The drawback for me was that the art style was not be the best fit for the story with its less serious feel, but Del Pennino throws a lot of X-Men history and villains into the small amount of pages allocated.

“In His Honor” has Colossus and Nightcrawler honoring Wolverine in their own way. Artist Iban Coello’s style is reminiscent of Ed McGuiness, just not as large, or clean a line. Unfortunately the ending of the story is similar to the first making it feel like more of the same, which is really evident considering it’s in the same issue, and the story immediately following the first. Writer Joshua Hale Fialkov’s story lacks the emotion he was going for which makes it the least enjoyable of the three.

Finally, “A Little Piece of You” doesn’t end this issue on a high note. Armor is coping in her own way, in the Danger Room. As she takes on a group of Wolverine villains, it all becomes a bit too much for her to handle. It takes a bit of a strange turn with her looking to drink Wolverine’s left over beer (she is underage), and then explains her powers in a not so easy to follow way which will leave readers unfamiliar with her origins and powers scratching their heads.

If you’re already really missing Wolverine and are looking for something to fill that gap, you could give this a try, otherwise you can just let Wolverine rest in peace and try to move on.  Although there is some solid storytelling here, this isn’t a must read by by any means.  An average comic for only the most dedicated Wolverine fans to keep their collection of anything with ‘Logan’ on it complete.

The goal of ComicSpectrum is to provide a one-stop reference for everything about & related to comics and comics culture.
View all posts by comicspectrum →
This entry was posted in Marvel and tagged comic books, comics, death of Wolverine, Iban Coello, Jeff Loveness, Joshua Hale Fialkov, Life After Logan, Mario Del Pennino, Marvel, Wolverine. Bookmark the permalink.