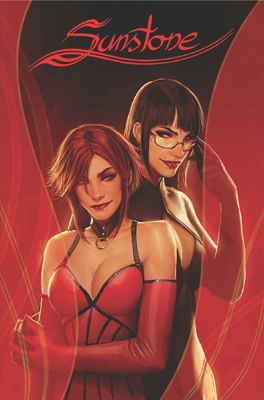 Rating: 5/5 – Love in the Age of Latex.
by ComicSpectrum reviewer Al Sparrow.

Now that I have your attention, let’s talk about how that word “deviant” is really unfair. If we’re being honest, or as honest as we can be in a comic book review, there’s nothing ‘deviant’ about the fetishes we often keep buried deep inside of our minds, maybe only bringing them out in the most private of moments, when nobody is around to judge us, and we feel no need to justify ourselves to anyone. It could be that in those most private of moments we’re at our most liberated…our most honest…but for many of us those hidden desires and passions remain just that: hidden. Still, they’re ours. They belong to us. I know I have mine. And you, if we’re being honest here, have yours. It’s for the rarest and the bravest to be willing to actually share such things, and even then only to the most trustworthy of souls.

Sunstone began as a way for creator Stjepan Sejic to unwind from his work on numerous Top Cow titles like Witchblade and Aphrodite IX. He created a Deviantart account with a name that wouldn’t tie him to his other work, and began drawing various BSDM-oriented pinup artwork. Hardly something unique to the internet, but given that the artist is Sejic it didn’t take long for two things to happen: One, a following developed quickly (it’s where I first heard about this book), and Two, a storyline began to develop.

Ally is a lonely but fairly well-off woman who has always had the desire to be a Dominant. Lisa works in a diner, wants to be a writer, but has always dreamed of being a Submissive. They meet online, and after a considerable amount of time agree to meet in person. At this point many of you are likely mentally typing “Dear Penthouse…” but if that were all there was to the story it’s unlikely it would have found its way to my review stack, or to my bookshelf. There’s nothing wrong with porn, but I have the internet for such things.

I won’t quibble – Sejic knows how to render the female form, and render it well. This book is loaded with gorgeous visions of Ally and Lisa in a number of fun and sexy positions as they explore their new-found relationship. It’s the writing, however, that makes this book more than just mere eye-candy. Ally and Lisa have sections devoted to what ignited the fetishes that they have, and talk about the aforementioned reasons for keeping such passions hidden, as well as how much trust comes into play. By the time you close the book on this first chapter, you may see these two not as titillating objects for male fantasy, but as two real people trying to figure out how to make their desires work for them.

Of course, you could just pick up the book to drool over the images of Lisa and Ally in various stages of BSDM-play, and I couldn’t blame you. Sejic’s an incredible artist and I’m looking forward to his run on the Rat Queens title. That said, if that’s all you’re picking the book up for, you’re missing a good 75% of what makes Sunstone a great book. It’s an honest look at something many people keep buried, and why they are compelled to do so, and how incredible it can be when you find that one person you’re willing to trust enough to share it with. A love story? Not yet, perhaps in Volume Two.

The goal of ComicSpectrum is to provide a one-stop reference for everything about & related to comics and comics culture.
View all posts by comicspectrum →
This entry was posted in Image and tagged Adult, Bondage, BSDM, Image, sex, Stjepan Sejic, Top Cow. Bookmark the permalink.