Posted on February 21, 2015 by comicspectrum 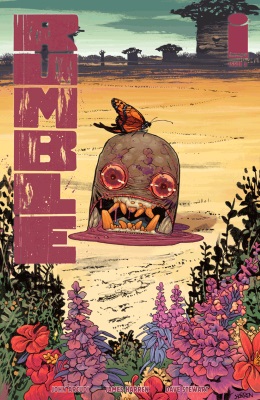 John Arcudi and James Harren’s creation Rumble has been a decidedly peculiar book: talk of scarecrows is all I can recall—other than advertising shots of the first cover—that eventually made me give the book a look. It’s been a strange ride so far, with a few clearly connected, but not-yet-intersecting plots to its name. We’ve got Mr. Bildad the cat who has been going through some…interesting things (though he doesn’t appear this issue, sadly, so we’ll leave that be for now), Rathraq the aforementioned scarecrow who can’t seem to leave protagonist Bobby and his friend Del alone, and the now-named Esu who are pursuing and taunting Rathraq.

This issue lets Rathraq fill us in on his background, in a speech that immediately resembles the rambling gibberish of Vince Clortho in Ghostbusters as he talks about the rectification of the Vuldrini—inspiring a similarly, “Um…okay!” response from Bobby and Del. Part of the joy of this book has been the balance Arcudi and Harren strike between the mythic fantasy embodied in Rathraq, the banality of Bobby and Del, and the humourous intersections of the two tones. This issue is no let down: Del’s naïve enthusiasm (and absurd ideas) for Rathraq’s quest for vengeance—seeing it as “classic good vs. evil!”—and Bobby’s pragmatic incredulity at it all are delightful, as is Rathraq’s ability to “fish-out-of-water” his way through Bobby’s life without losing his aura of strength and rough-hewn, humourless warrior.

Arcudi keeps the plot rolling here at a nice enough pace that lets us learn more about what this craziness is that we’re reading, without spilling all the beans in one go. He has Bobby point out that battles like this, at least in reality (where Bobby is firmly planted) are rarely as simple as Del would like them to be, hinting that Rathraq’s glorious, epic history is perhaps skewed or maybe just place-less in modern times. There’s the definite sense of a tightly continued story here, of a maintained flow through these first three issues that shows a lot of freshness and excitement in the creators.

Speaking of the fact that our creators are, indeed, plural, Harren’s art continues to be great fun, from an opening barbarian-shot of Rathraq (and fabled war hound Slanjau) to the hilariously juxtaposed image of scarecrow-Rathraq perched on a recliner reciting this story to the smaller Del and Bobby (who are relegated to stool and milk crate, respectively). Harren brings a load of character to everyone—even the mostly “faceless” scarecrow-Rathraq, but especially to our two disparate protagonists, with faces that tell us everything we need to know about what they think of the stories they’re told. Dave Stewart gives us colors that are just muted enough to avoid distraction in their wild variance, best exhibited in a brief, spectral shot of Father Ayatal.

Rumble #1 was one of my favorite story/character debuts in the past year, and the third issue doesn’t relent on the promise it showed. It’s a joy to see Arcudi and Harren running wild and boundless in their sense of action and adventure, even when they proceed to deflate them to just the right degree with their sense of humor. I continue to look forward to what happens with Rathraq, Del, and Bobby—and especially Mr. Bildad (I have my theories, but I shall keep them to myself!)

The goal of ComicSpectrum is to provide a one-stop reference for everything about & related to comics and comics culture.
View all posts by comicspectrum →
This entry was posted in Image and tagged comedy, comic books, comics, Dave Stewart, Fantasy, horror, James Harren, John Arcudi, Mr. Bildad, Rumble, scarecrows. Bookmark the permalink.