Posted on February 22, 2015 by comicspectrum 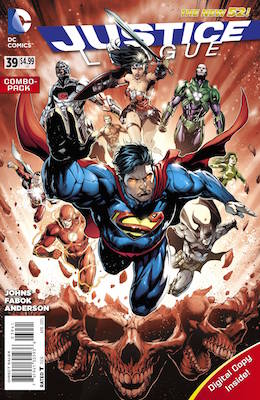 When the New 52 was launched, many of DC’s characters went through a change, an update or a reboot. Some characters change was for the better, cleaning up years of continuity confusion and giving new readers a great place to jump on board. For long time DC fans, many character’s change felt as though it was done just for the sake of change. Costumes were tweaked or origins were slightly altered, but the character remained true to it’s original incarnation so readers questioned just why change was needed. In the latest storyline in Justice League that concludes with issue thirty-nine, we see an updated origin for long-time Justice League villain Amazo, and it’s an update that’s both smart and an upgrade on the original android version that first appeared in Brave and the Bold.

The Amazo virus has been released into the world granting humans super powers before burning them out and killing them, and it’s all Luthor’s fault. In this issue we see the effects of the virus on an infected Justice League and the spotlight falls on Wonder Woman and surprisingly Captain Cold who are forced to hold them back while Superman works with Lex Luthor to stop patient zero, now known as Amazo, and come up with a cure. It’s an exciting issue that’s heavy on action and despite a somewhat quick wrap up at the end, the throw down between Justice League members and Wonder Woman is fantastic to see, and the potential of Amazo as a future Justice League villain poses a huge threat based on his powers and origin.

Getting the job of drawing the Justice League is as about as high profile as it gets and artist Jason Fabok does amazing things with the opportunity. Fabok’s pencils are detail heavy in characters and backgrounds, and not one single page within this issue looks rushed. The infected league, especially Batman look as intimidating as they should and you’ll end up wishing that Fabok gets a chance at some point to draw a Wonder Woman story as the action scenes with her leaping off the page are just that good. I’m about as big of an Ivan Reis fan as you can get, but I think Fabok’s interpretation of the League is just as strong.

Writer Geoff Johns has taken a villain with a simple yet effective premise and has added a layer of depth that ultimately makes the character more interesting and more compelling. Also, at the end of this issue we see the return of a hero to the Justice League right in time for the next big storyline, the Darkseid War. Exciting times are ahead for the League with the return of Darkseid and the Anti-Monitor, but this latest issue concludes an exciting arc that shouldn’t be missed. Justice League combines the wonderful writing of Geoff Johns and the brilliant art by Jason Fabok to create a super hero book that I think deserves your time.

The goal of ComicSpectrum is to provide a one-stop reference for everything about & related to comics and comics culture.
View all posts by comicspectrum →
This entry was posted in DC and tagged Amazo, comic books, comics, DC Comics, Geoff Johns, Jason Fabok, Justice League, New 52, Superman, Wonder Woman. Bookmark the permalink.