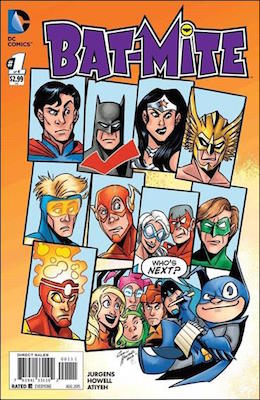 Rating: 3/5 – Can an All-Ages Book Work Within the DCU?
by ComicSpectrum senior reviewer Shawn Hoklas.

Bat-Mite is a book that seems a bit risky for DC to be publishing under the main DC imprint. It’s not necessarily just for younger readers, but it’s clearly an “all ages” book which usually implies that it’s not necessarily for adults. I love the fact that DC is choosing to publish books like this and Bizarro that take the more quirky characters of the DCU and breathe some new life into them in the form of mini-series and ongoing series. Although I love the idea, so far I’m not loving the execution.

Bat-Mite’s art by Corin Howell is a great fit. His pencils are absolutely cartoon-like and it’s the art that, much more than the story, gives it that all ages feel. Bat-Mite is drawn in an animated style that proves to be effective even when Bat-Mite’s cast out of his dimension and into the “real” world. When we see Bat-Mite next to Batman, it somehow works even though Batman isn’t drawn with the same style. The styles are close, yet they’re still so different. There’s even a surprise guest star who looks as though he’ll have a larger role in the second issue and he’s drawn as though he could fit right into a main DC-line book, but still seems natural when appearing alongside a three foot imp wearing a bat-suit.

As much as the art works for the character, I didn’t feel like the writing was always a fit. I loved the opening sequence that has Bat-Mite being banished from his world, and although we don’t yet know the why, his banishment to earth kicks off the story and Bat-Mite’s adventure in the DCU. Writer Dan Jurgens writes a decent story, but I never found myself laughing, or all that enamored with the Silver Age creation. The opening had me excited for a journey through the world Bat-Mie lives in, but the setting quickly changes to the main DCU and trying to make both the craziness of Bat-Mite live right alongside what’s supposed to be a real word in the DCU is a challenge that Jurgens didn’t quite meet for me in this first issue.

What we do get in this first issue is a story that’s setting up Bat-Mite to have interactions with DC characters and villains that aren’t Batman, making Bat-Mite the star rather than the supporting character. This is a character that plays well against the straight-man and no nonsense Batman, and how he stands on his own remains to be seen, but Jurgens did pick a character for next issue that can potentially play that role. I’ll be interested to see if this all ages book set in the main DCU can work, but so far I’m not confident it can.

The goal of ComicSpectrum is to provide a one-stop reference for everything about & related to comics and comics culture.
View all posts by comicspectrum →
This entry was posted in DC and tagged Bat-Mite, Batman, comic books, comics, Corin Howell, Dan Jurgens, DC Comics. Bookmark the permalink.