Posted on August 9, 2015 by comicspectrum 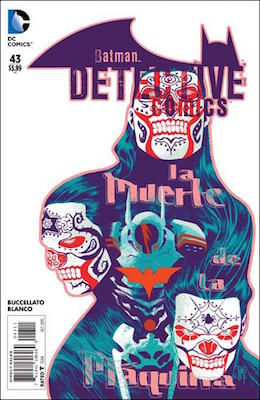 Rating: 3/5 – An Inconsistent Approach to the GCPD and Batman.
By ComicSpectrum senior reviewer Shawn Hoklas.

Detective Comics number forty-three is a story that attempts to balance Batman and the Gotham City police. This could be a really good thing as series in the past like Gotham Central have shown that there’s so many stories waiting to be told in a city that’s full of crime and corruption. Unfortunately, the writing is never all that sure which way to take the book. Instead of embracing the GCPD and Harvey Bullock, who is the best part of this story, it tries to make Gordon and the Bat-Suit the star as well. There’s some definite high points with this issue, but ultimately it left me feeling as though the book is lacking a clear direction.

This issue of Detective Comics opens up right where the last one left off and writer Brian Buccellato does a great job of making Jim Gordon seem overwhelmed and human after a fight with La Morte. Buccellato and artist Fernando Blanco show a realistic Gordon hunched over trying to catch his breath, and in the same scene, then sitting down against an alley wall with a bloody nose and a tired look on his face. It’s a realistic approach to how someone Gordon’s age may handle running around in a mech-suit. Add that realism to Bullock’s and the GCPD’s investigation into the suit’s stolen power core, and it seemed as though this story was embracing the “Detective” side of Detective Comics. Soon after though, the story shifts its tone to a more super hero and super villain feel with an ending that just seemed out of place and a guest starring villain that personally, I wasn’t all that interested in seeing.

Blanco’s art has its moments as he captures Bullock and Gotham so well. On the flip side, Gordon looks extremely young which detracts from the realism presented in his actions and body language, and there’s another cop who’s drawn later in the issue that looks exactly like Scarlett Johansson, which took me right out of the story. Overall this issue has it’s highs and low points which gives the book an inconsistent feel, and left me questioning what kind of book it’s ultimately trying to be. I’m hoping for a GCPD book with a little bit of Batman sprinkled throughout but after the last page, I feel as though it’s headed in the opposite direction.

The goal of ComicSpectrum is to provide a one-stop reference for everything about & related to comics and comics culture.
View all posts by comicspectrum →
This entry was posted in DC and tagged Batman, Brian Buccellato, comic books, comics, DC Comics, Detective Comics, Fernando Blanco. Bookmark the permalink.