Andrew Brendan: King of the Internet! #1

Posted on November 14, 2015 by comicspectrum 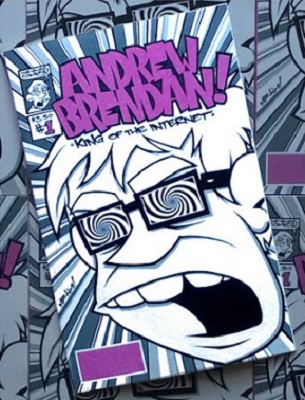 Every nerd group has an Andrew Brendan in it. That know-it-all who not only delights in being more knowledgeable about a subject than anyone else, but takes extreme pleasure in pointing out how much more he knows to others, and how much lesser those people are for not being on his level. He’s that person who hates Dr. Who “fans” who think Christopher Eccleston was the First Doctor. He’s ecstatic to point out how superior Trek is to Wars (Oh, did I need to put the word “Star” in front of those for you, newbie?). All writers are hacks who aren’t doing it right. All artists are posers who’ll never live up to his standards. And heaven forbid a woman claim to have knowledge of geek culture…he’ll quickly put those “fake geek girls” right in their place.

You’ll find it a little trickier to get your hands on a copy of Andrew Brendan: King of the Internet #1, if you’re one of those “losers” (as Andrew would put it) who still buys their comics from a store, as you have to buy this one directly from creator Tim Chamberlain (www.ourvaluedcustomers.net), but it’ll be the best $5 you’ve ever PayPal’d anyone for anything. If you’re familiar with Chamberlain (aka Mr. Tim) and his work on Our Valued Customers (chronicling the actual stupid things people say who visit his local comic store) you already have a rough idea of the type of humor he’s bringing to Andrew Brendan. Short one-page comics mix in with a few longer narratives, all with a commentary on just how horrible we as geeks can often be, not just to “outsiders”, but to each other. I found myself laughing out loud at some of the things Brendan said, because I knew people who’d said something similar. Just as quickly my laughter would turn to a groan as Brendan said something I was guilty of saying in the past.

Andrew Brendan: King of the Internet is an absolute must-read if you dare call yourself a geek of any stripe. We all know this guy, and we all hate him…but the comic also serves as a cautionary tale because all of us – yes even me, even you – are in danger of becoming him if we don’t keep our guards up.

The goal of ComicSpectrum is to provide a one-stop reference for everything about & related to comics and comics culture.
View all posts by comicspectrum →
This entry was posted in Small Press and tagged comics, Geek, Geek Culture, humor, Indie, Mr. Tim, Our Valued Customers, Tim Chamberlain. Bookmark the permalink.