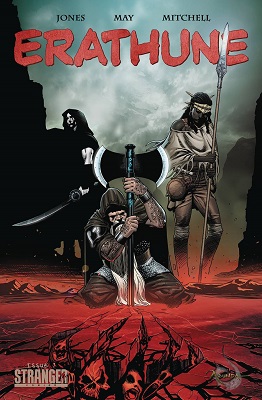 Rating: 4/5 – Dwarves and Elves and Orcs, Oh My!
by ComicSpectrum EiC Bob Bretall

Erathune #1 is another “I didn’t pre-order it, but picked it up when I saw it on the rack at the comic shop” book for me.  It’s one of the reasons that I try to go to a comic shop with a good selection (meaning lots of Indies in addition to the standard super-hero comics) every week.  When I’m home I go to Comics Toons’n’Toys in Tustin, CA.  When I’m on the road I try to stop in at local shops wherever I’m at.  I picked this comic up at Third Eye Comics in Annapolis, MD, which is a fabulous full-service shop with a world class selection of comics.

Back to the comic… The main character in Erathune is a Dwarf named Buxton Stonebeard.   He was banished from his Dwarven home 200 years ago, but now he has come back home.  Writers Sebastian A. Jones and Darrel May seem to be laying the groundwork for a fantasy epic here.  The main character and focus is on the dwarves, but there are light and dark elves in the story, as well as the fairly common fantasy threat of an all-out orc invasion force.  Sheldon Mitchell’s art (working off layouts by Darrell May) is solid and ably conveys the story while keeping things moving along.  Mitchell does a great job on faces, body language, and backgrounds; he really sold me on the characters and world.

Erathune is set in the fantasy world of Asunda, which is a common setting to a number of other series from Stranger Comics including Niobe, The Untamed, and Dusu.  I have not read any of the other offerings from Stranger yet, but the shared world concept is something I hope they use sparsely while they are building their audience.  The last thing I would personally want to see is a premature cross-over of titles in the first year or two before each series can establish its own voice and following.

Erathune #1 is a solid introductory issue with a good balance of action and character development.  It’s seems to be a title that is best suited for fans of the fantasy genre. If you love worlds where axes, bows and swords are state-of-the art weaponry and don’t mind the writers tossing around strange fantasy names for people, places, and things then this will be right up your alley.  For my own part, reading Tolkien in middle school, playing in a D&D campaign starting in 10th grade (1978) and staying a fan of the genre ever since puts me squarely in the demographic this kind of story is aimed at.  I’m doing my April comics pre-order this week and Erathune #2 (Diamond code APR161901) is on the list!  I’m looking forward to seeing how the Dwarf-Orc war plays out in the world of Asunda.

The goal of ComicSpectrum is to provide a one-stop reference for everything about & related to comics and comics culture.
View all posts by comicspectrum →
This entry was posted in Stranger Comics and tagged comic, Dark Elf, Darrell May, Dwarf, Dwarves, Elf, Elves, Erathune, Fantasy, Orc, Orcs, Sebastian A. Jones, Sheldon Mitchell, War. Bookmark the permalink.