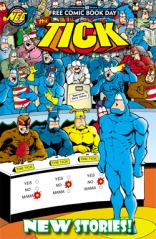 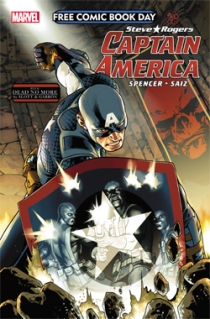 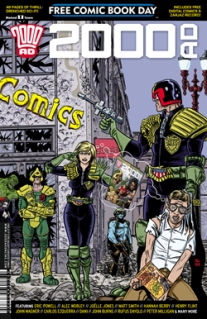 I was not allowed to talk about the Marvel books until their official release date, FCBD May 7th, so the Gold book from Marvel (Civil War II/Avengers) had to wait until today instead of getting reviewed along with the other Gold books.  This round of the ComicSpectrum FCBD 2016 Review Extravaganza will focus on comics featuring costumed heroes and anti-heroes.

At this point Free Comic Book Day is pretty much over but I hope everyone had a great time visiting a local shop or two.  Getting some great free comics is fun and supporting your local retailer is even better.  Hopefully everyone got to take advantage of some sale or event at their shop, I know I did.  Now, on to the reviews!

This was a Gold Level book and every shop should have had plenty of these.  It was a good intro to Civil War II for new readers, but nothing unique that existing Marvel  fans are not going to read when they pick up the book in a month or so anyway.  The same can be said of the debut of the all-new Wasp in some pages from All-New Avengers #9, but that’s not a bad thing since FCBD should be about getting new readers interested in comics, and after the smash debut of the Civil War film a lot of people will be picking this up just because of the name on the cover.  In fact, the comic shop I visited today was doing a brisk business in selling Civil War collected editions while I was there.  The only downside to this is that in shops that limit fans to picking only a few (maybe 3, 4, or 5) free comics, hard core Marvel/Super-Hero fans are going to spend one of their choices on this comic that contains material they will see again in a few weeks anyway instead of using that choice to check out something new.

Similar to the Civil War II book, the Captain  America preview presents a few pages from a comic that will be out in a couple of weeks.  It’s a pretty good sample and should resonate with people who have seen the film that just hit theaters.  That’s not the actual exciting part about this issue for me.  That comes in the Spider-Man prelude to the “Dead No More” storyline that will be coming to the Spider-Man titles this Fall.  This is exciting to me as a longtime fan as it raises a lot of questions and has me looking forward to “Dead No More”.  On the other hand, I think these 9 pages will be pretty impenetrable to new readers, as it’s a Peter Parker/Spider-Man vastly different from the one they just saw on the big screen and it utilizes a bunch of characters they will likely be unfamiliar with.  I won’t go into the last page reveal to avoid the spoiler, but it has me, as a long time Spider-Fan, wanting to read more. 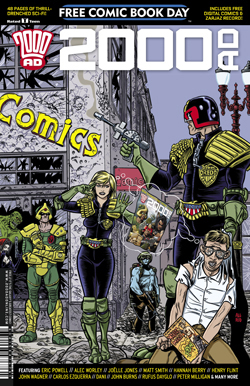 There was a bit of a controversy surrounding this issue as it was initially excluded from FCBD because some retailers did not like dealing with it in the over-size format it had used in previous years.  The issue was sized down to normal comic format and everyone was happy.  The good part is we get to see a cover by Mike Allred and the 6 page lead-off Dredd story with art by none other than Eric Powell (The Goon).  Seeing Powell’s painted art on Dredd was a treat…and there is so much more in this issue!  6 additional stories told in 32 pages, with an additional page of Judge Dredd daily strips.  A lot to offer and each one has a QR code that can be scanned to get more information, 2000 AD went all-out to give a great package of entertainment to their fans, and as a result, they get my “pick of the page” for this set of reviews. 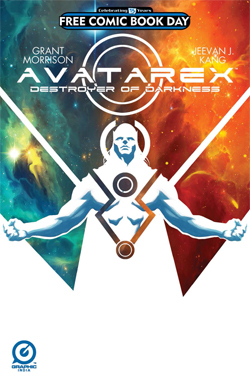 From the script sample in the back, Morrison describes this as “a widescreen science fiction comic set in contemporary India and the rest of the world.  Avatarex takes place in a world that’s as close to our own as we can make it.”  There is definite influence of Indian mythology and this should have an appeal beyond the Indian market, if people were to only give it a chance.  The interesting part in seeing the script and comparing it to the comic pages is that the artist seems to have frequently ignored specific stage directions Morrison added regarding composition, camera angles & color.  It didn’t affect my enjoyment of the story as presented, but was more of a “this is an interesting view into the creative process of the art team working from Morrison’s script” moment when I read the script.  The back half of this issue presents Morrison’s “18 Days”, a sweeping epic that is as Morrison describes “modern, gritty, and emotionally real against a backdrop of a techno-mythic super-war”.  That’s quite a mouthful.  I read the 1st and 2nd issues of this when it came out a while back and both the story and art failed to click with me, but having read those issues I can say that the preview presented here is a fair representation of what you’ll get in the comic, so if you like this preview you should definitely check out the collected edition. 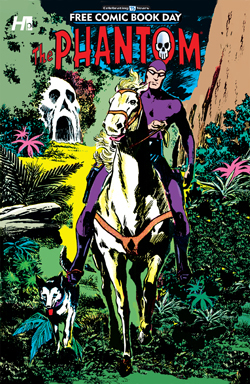 On the plus side, the inside front cover explains exactly what you’re getting here with a “For those who came in late…”  The Phantom is having his 80th Anniversary, he has been around a long time and had a LOT of comics published, though he’s not very well known to many fans today.  I’m not convinced that this is the best way to introduce them to the character.  The stories are very dated.  The writing is cringe-worthy in many places, which won’t bother people looking at this through the lens of history and reading these as if from a time capsule, but that is not likely  to snag new fans.  The art by Jim Aparo does not come off as his best work, though a lot of that can be attributed to the poor reproduction.  There are likely not clean copies of the Charlton material to shoot new masters from and the line work is muddied in many places, with garish color not adding to the eye appeal.  The editorial at the front describes the art as “stylish”.  We can agree to disagree, I’m a big fan of Aparo’s and this art does not, in my opinion, hold a candle to his DC work on Batman, The Spectre, or Aquaman.

I enjoyed the story of Mercy Sparx as a little girl, there were some really funny moments and it made me want to check out more of her “Year One” story.  The Badger, on the other hand, didn’t click with me at all. The premise is Badger in a boxing match with Vladimir Putin, with Putin looking so little like the actual man that if the writing didn’t alert me that this is who it was supposed to be I’d have never known.  Add in a patently offensive accent from an Asian character that seems lifted straight out of a comic from the 1940s and I certainly won’t be back for more Badger.  The Squarriors (Squirrel warriors) return in a prelude to their new series “Summer” and I love these little guys, particularly the art by Ash Maczko, this is a great sample story of exactly what you’ll get if you pick up a Squarriors comic.  Wrapping up the issue is a 4 page Public Relations story loaded with sexual innuendo, so that too is a good example of what you’ll get in the regular series.  Overall a good sampling of comics from Devil’s Due and 1First comics, if you like what you see here you should be asking your shop to carry the books.

The Tick is still going strong, after almost 30 years (he debuted in 1988).  He has had a cartoon series, a short-lived live action series, and has appeared in close to 100 comics over the years, including 6 FCBD comics with all new stories.  A cool thing NEC is doing is offering to send readers copies of any (or all) of the previous 5 FCBD issues for free, as long as you pay the price of postage (by sending a SASE while supplies last).  A great offer for fans of the big blue arachnid.  I think I’m safe in saying these comics are the only ticks that most people would want to have around the house.  This issue gives readers 29 pages of Tick (and Arthur) that are a fairly good representation of the character in all his silliness, and it’s all ages friendly.  If you’re a fan of The Tick or just want to see what he’s all about, this FCBD comic is a good place to start.