Posted on September 28, 2016 by comicspectrum 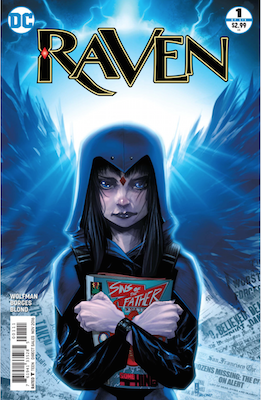 Creators Marv Wolfman and George Perez created the character Raven over thirty-five years ago. She was the supernatural and magical team member of the New Teen Titans and really became a fan favorite as well as the top selling comic in the mid-1980s. Raven has a really strong origin and a striking design so it’s easy to see why that fan base grew so strong. Unfortunately, I lost my interest in the Titans book from the New 52 a while back so my only interaction with the character in the past few years has been from the show Teen Titans Go, which at times can be hilarious, but does a nice job of capturing some of what makes the character so great despite the emphasis on humor.

Now original co-creator and writer Marv Wolfman has returned to write a six issue mini-series starring his famous character. Without having read almost any of Raven’s New 52 storylines, Wolfman does a nice job of writing a story that doesn’t need that reference, at least so far. Raven is moving into her Aunt’s house and begins to attend a new school. This allows the reader to identify with the Raven as she deals with all the change, and through these characters she interacts with, anyone not familiar with the Raven can get to know her the same way her new family and classmates do.  The art by Alisson Borges is strong throughout and her design of Raven’s costume looks great with just a couple minor changes.

At the same time if you are familiar with the character, seeing her interact with the devout Christian family she moves in with gives this book a bit of humor and depth. When Raven attends school for the first time, she encounters an energy that she knows isn’t right. Just what that energy is and how it will affect her and those now close to her remains to be seen. This book is lacking the Rebirth cover dress so this may not make it into the hands of new DC or previous New 52 readers, but I’m glad I ordered it. According to DC’s solicits, this takes place between Teen Titans #24 and the first issue of Rebirth but there is no mention of that and you really don’t need to know that. Wolfman obviously understands this character and he’ll keep me coming back for the remainder of this series.

The goal of ComicSpectrum is to provide a one-stop reference for everything about & related to comics and comics culture.
View all posts by comicspectrum →
This entry was posted in DC and tagged Alisson Borges, comic books, comics, DC Comics, Marv Wolfman, Raven, Teen Titans. Bookmark the permalink.