The Spectacular Sisterhood of Superwomen

Posted on October 6, 2017 by comicspectrum 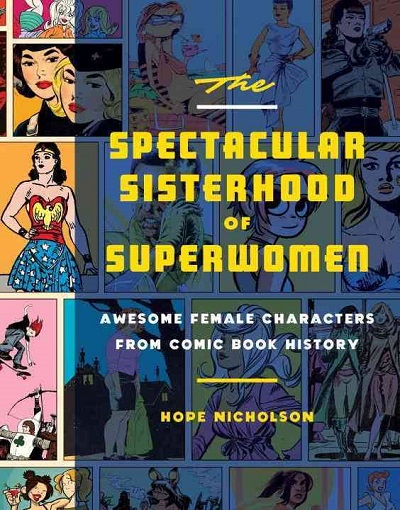 Rating: 5/5 –  A Valuable Resource for Fans of Heroines – both Super and Otherwise.
by ComicSpectrum reviewer Al Sparrow.

My name is Al Sparrow and I love superheroines. I began a recent review with those same words, no less true now than they were then. Where that review covered a manga more concerned with the overly titillating aspects – pun intended – of all things super-powered and feminine, this time around we’re examining a book that covers comic book heroines throughout history. From the super-powered to the strong willed. From the spandex-clad to the fashionably (and perhaps more sensibly) dressed. From “good girls” to “bad girls” and all points in between, The Spectacular Sisterhood of Superwomen: Awesome Female Characters from Comic Book History covers it all…okay, almost all of it all…and belongs on any comic book historian’s shelf.

Quirk Books has been knocking it out of the park lately with their examinations of all things simultaneously brilliant and bizarre regarding comic book heroes and villains of eras bygone. The League of Regrettable Superheroes and The Legion of Regrettable Supervillains (both by Jon Morris) are invaluable tomes for anyone curious about the comic book also-rans of yesteryear, or anyone who just wants to win at obscure comic book trivia. This third book, with writing chores taken on by Hope Nicholson, doesn’t follow that same formula. It may even be a mistake on my part to call it a third book in the series, as it really does stand apart from those other two books not only in content, but in its approach to said content. Superwomen takes a more serious look at the role women have played not just as comic book characters, but as comic book creators, writers, artists, inkers, colorists, letterers…look, it basically proves a point that some comic lovers always knew and that some did not know: Women have always been an important part of comic books, they just haven’t always (ever?) received the same level of acknowledgement their male peers have.

Each chapter covers a decade, with individual write-ups on those female characters who helped define that era. Nicholson does a great job not sticking with one particular type of female heroine – plucky reporters with a lot of gumption from the 40s share the pages with bikini-clad modster models from the 60s and dental floss costumed bad girls straight out of the 90s. She does not judge – although she doesn’t shy away from making her opinions known – but instead tries to paint a broad picture of the zeitgeist of a decade, and how these female characters and their creators helped to define it. Every chapter ends with the one heroine who best helped define it – Hope calls it the “Icon of the Decade” – and you can imagine who might be chosen for each one, depending on how well you know your comic book history.

A really nice inclusion is the “Essential Reading” at the end of each character’s entry. Sure, it’s easy enough to find Barbarella collected editions, but good luck trying to find Starr Flagg, The Wing, or Maureen Marine if you don’t know where to look. Fortunately, Nicholson points out places either online or in print where you can do further research – when it’s available of course. So many of the characters in this volume are sadly lost to history, with reprints unlikely. Even still, astute back-issue bin divers or collectors of vintage books will perhaps find some new treasures to hunt.

The goal of ComicSpectrum is to provide a one-stop reference for everything about & related to comics and comics culture.
View all posts by comicspectrum →
This entry was posted in Quirk Books and tagged comics, history, Hope Nicholson, prose, Quirk Books, Superheroines. Bookmark the permalink.

1 Response to The Spectacular Sisterhood of Superwomen