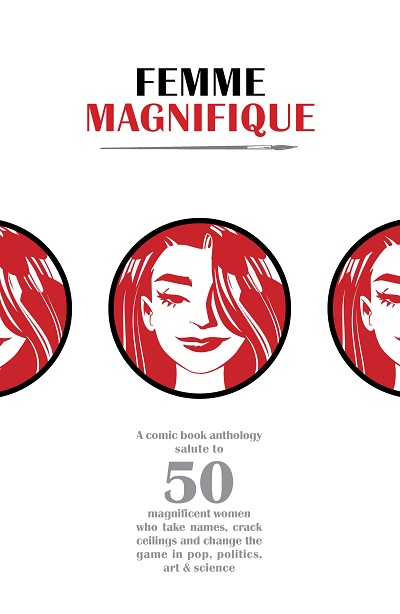 My name is Al Sparrow and I love superheroines. If you’ve read my most recent reviews (and why haven’t you?) you’ve seen this phrase a couple times already. Once for a manga that pushed the boundaries of what a superheroine (and their costume) must endure, and a second time for a book about the various and wonderful superheroines who have graced comic pages over the past several decades. I hope you’re willing to let me use the phrase just one more time for a crowdsourced book that I recently backed that recently arrived in the mail.  Once again it covers the topic of superheroines – real life ones this time.

Femme Magnifique is a comic book anthology praising 50 women who pushed our boundaries, shook our foundations, and redefined our perceptions of who women truly are. Their stories are related by 50 writers and artists (sometimes one in the same person) who are given three pages plus a quote page introduction to tell their story. The book takes a unique approach, however, in that it asks these writers and artists to not necessarily just relate the history of these women, but also illustrate how they affected them personally. It’s one thing to have Hope Nicholson (remember her from that other book I reviewed?) do a piece about Margaret Atwood, quite another to have her show how the two of them relate to each other, and how she perceives others perceptions of the famed author. Another example: A chance meeting with a not-quite-famous-yet Laurie Anderson influenced Peter Gross’ outlook on not just art but the world around him. It’s a simple concept: Artists influence artists. People influence people. Women influence everybody. Perhaps neither entity is aware of it while it’s occurring, but this book does a wonderful job showing, not telling, how it does occur.

Many of the “usual candidates” are here. A book on highly influential women would be suspect not to include people like Ursula Le Guin, Sally Ride, or Harriet Tubman. Yet right alongside them are some personal heroes of mine I was surprised to see – Hedy Lamarr, Beth Ditto, and Rumiko Takahashi – and it’s interesting to see just how these women influenced others, even if it wasn’t the same way they influenced me. Additionally, there are a number of new…well, new to me…names and faces that I now want to learn more about. I feel Roz Kaveney, Diane di Prima, and Louise Fitzhugh can teach me a lot, and perhaps they still will if I’m willing to not let their story end with the three pages in this tome. Chances are you’ll find different women you’ve never heard of, and will be inspired to find out more. If that happens even once, the book has done its job.

It’s worth noting that Femme Magnifique employs both male and female creators to talk about how  women inspired and influenced them. To be sure, they could have adopted a “females only” policy, and that would have been fine, but I think it’s a more powerful statement to show that these women aren’t just looked up to by other women…they’re looked up to by everyone. You can even take three blank-paneled pages in the back of the book to create your own personal 51st influential female. I noticed Joan Amatrading was suspiciously absent from my volume. Hmmm…

My name is Al Sparrow and I love superheroines. I have since I was a child, and I will until I pass on from this world. Still, as long as I’m on this plane of existence, it’s comforting to know that real ones walk among us, isn’t it? They’d likely deny it if you confronted them with it, but in my mind there’s little doubt…the 50 women in Femme Magnifique are just that. Superheroines.  If you didn’t back the Kickstarter months ago, there’s not a way for you to get a copy of this wonderful book in print at this time, but fear not:  It is available digitally on Comixology if you want to read it.  The chief benefit of digital comics is that the”print run” does not sell out!

The goal of ComicSpectrum is to provide a one-stop reference for everything about & related to comics and comics culture.
View all posts by comicspectrum →
This entry was posted in comixology, Kickstarter and tagged Anthology, Biography, comics, comixology, Females, Superheroine, Women. Bookmark the permalink.