Posted on December 5, 2017 by comicspectrum 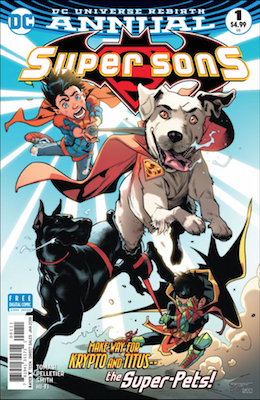 If you put Krypto on a cover, that’s going to be a must buy for me! I love the golden and silver age feel of comics that he invokes whenever he makes his appearance. I’m still on the hunt for a first appearance of Krypto in Adventure Comics #210, but the prices for what can be considered a reoccurring, yet more obscure Superman character are still more than I’d like to spend. Even in low grade (around CGC 3.0), prices hover around one-thousand dollars. There is something special about the character though, and Super Sons Annual number one is a great example of why!

Not only does this annual star Krypto, but it teams up all of the Super-Pets including Titus (Damian’s Great Dane, for those not following recent bat-lore), Streaky and a couple more characters I don’t want to spoil. Writer Peter Tomasi and artist Paul Pelletier tell a fun and light-heared story that embraces the fun side of these characters without it ever feeling as though it’s a kid comic. There’s someone in New York who’s kidnapping local animals and before Superboy can get to it, Krypto takes it upon himself to investigate. While the Super Sons are in this issue, they play a small role to make way for the Super Pets.

Pelletier does a really great job of handling Superboy and Robin, drawing them at the age they should be, but he does an even better job on the pets. Krypto has tons of life to him, and so do all the other animals. The inks and colors do a great job of keeping the art bright, but fitting in right alongside any other issue of Super Sons. I may be bias with my affinity towards Krypto and the Super Pets, but this is a fantastic annual for both story and art. How can you go wrong with some great creators working on the Super-Pets? The answer is you can’t. Read this issue!

The goal of ComicSpectrum is to provide a one-stop reference for everything about & related to comics and comics culture.
View all posts by comicspectrum →
This entry was posted in DC and tagged comic books, comics, DC Comics, Paul Pelletier, Peter Tomasi, Super Sons Annual, Super-Pets. Bookmark the permalink.