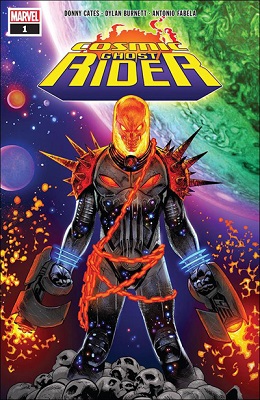 If you havn’t read the recent Thanos series and had a glimpse into the Cosmic Ghost Rider, then you won’t feel left behind in this most recent comic release. As soon as you open the comic you are brought up to speed, Writer Donny Cates leaves no stone unturned when it comes to what happened to Frank Castle to transform him into the Cosmic Ghost Rider. Not to spoil anything, Cates doesn’t provide all the details into what happened in the Thanos series, but directly how and why Frank Castle is now dead. Frank ends up in Valhalla, Odin himself found Frank to be a warrior and deserved a warrior’s heaven amongst the Gods. The only issues are, Frank is a mortal and some Gods don’t think Frank should be where he is, and Frank doesn’t take kindly to people trying to push him around. After a tussle in a bar, Frank is approached by Odin. The conversation does not go well, and Odin provides Frank with the option to live again as the Ghost Rider. Odin gives Frank the option to go back in time to anywhere he wants to push vengeance onto anyone he feels deserves his wrath, and his choice is rather surprising and almost disappointing.

The first issue of this series is captivating. Dialogue is well laid out and the story doesn’t hold back some major questions that readers may have. Frank has questions while in Valhalla for the Gods, and even Odin can’t look him in the eye when Frank is seeking answers. Artist Dylan Burnett brings a high rank of skill to the series, his scenery is breathtaking, and his action panels are intense. Frank transforming into the Ghost Rider is painful and chaotic, Burnett lets this be known with a fierce sequence augmented by Colorist Antonio Fabela capturing the vivid moments of pain, torture, and hatred.

I was skeptical to grab this comic without reading the Thanos series, but Cates really helped me as a reader to understand the story once I dove in. The only thing that is still questionable to me is the choice that Frank makes in going back in time. The idea could produce a great story in the future, but it puzzled me that Frank states he is going back to where things went downhill for him, and it’s not when his family was killed, or when he sold his soul to the devil. These two moments alone should be the highest horrible moments in Franks life, but I guess Donny Cates had a different opinion.  Even with that mismatch between what I expected and what Cates delivered, I still thoroughly enjoyed the issue and will be back for more next month.

The goal of ComicSpectrum is to provide a one-stop reference for everything about & related to comics and comics culture.
View all posts by comicspectrum →
This entry was posted in Marvel and tagged comics, Cosmic, Donny Cates, Ghost Rider, Marvel Comics, Marvel Cosmic, Odin, Punisher. Bookmark the permalink.