He-Man and the Masters of the Universe #2 (DC) 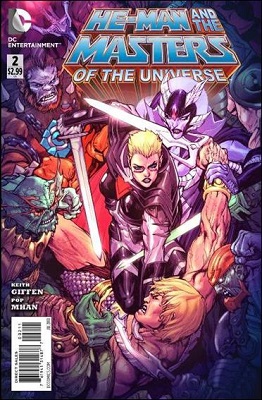 Although I was just a few years outside the target demographic when He-Man and the Masters of the Universe first arrived in cartoon format in the early 80s, I won’t deny that I was a fairly regular viewer. Coming home from school, I’d take my daily afternoon trip to Eternia before plowing into homework or, in most cases, jumping into the latest video game.

Over the past three decades (yes, it’s pretty much that old!), there have been numerous attempts to revive and revitalize the He-Man franchise. Some have worked particularly well. The series that came around just after the turn of the millennium, for example, was a great update to the series that didn’t forget too many of the things that attracted people to the original show, while not being afraid to try something new.

Now we have DC Entertainment’s take on all things Eternian, and while I tend to trust anything done under the watchful hands of Keith Giffen, I have to admit I’m proceeding with caution on this one. After the mini-series that forced Adam to “reclaim the throne” so to speak, we’re left with some truly head-scratching moments. Skeletor gone? The Sorceress…dead? Orko’s a villain? What the heck, Keith?

Yet it’s these very things that make the series the fun read that it is. Okay, Pop Mhan’s artwork has a bit to do with it as well – he seems to really enjoy drawing Teela (not that I blame him!) – but we’re dispensing with the syrupy morals at the end of the story and getting into a world that’s as much Game of Thrones as it is Eternia. Not that there isn’t humor (poor Mekaneck takes a beating in this issue!), but with the Horde at the gates and a bloodthirsty version of Adora who’s pretty far away from becoming She-Ra, this is definitely a He-Man for our times.

Time will tell if that turns out to be a good thing or not.

The goal of ComicSpectrum is to provide a one-stop reference for everything about & related to comics and comics culture.
View all posts by comicspectrum →
This entry was posted in DC and tagged DC, DC Entertainment, He-Man, Keith Giffen, Masters of the Universe, Pop Mhan, Teela. Bookmark the permalink.