Posted on September 2, 2013 by comicspectrum 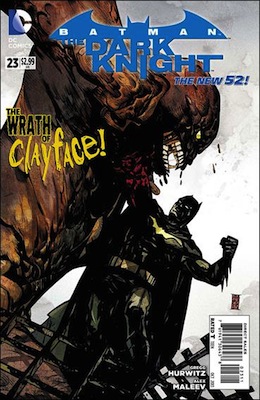 Clayface happens to be one of my favorite Batman villains, so to see him on the cover of Batman The Dark Knight number twenty-three made it a must buy for me.  I’m glad to say that the content inside the issue didn’t disappoint.  Writer Gregg Hurwitz and penciller Alex Maleev present a solid story that has Batman trying to capture Clayface, who is much more powerful and cunning than how he’s previously been portrayed.

This issue opens up with a SWAT team preparing to capture Clayface as he attempts to disrupt the Gotham City Securities Exchange.  Clayface poses a tough challenge as he can reshape his body into almost anything or anyone, and Hurwitz and Maleev come up with some clever ways to show off just how powerful he can be.  From there we see Batman stepping in with a new gadget he’s created specifically to capture the fast reacting Clayface.  The story has a straightforward premise…Batman trying to trap Clayface.   Hurwitz takes that straightforward premise and shows just how effective it can be throughout the course of the issue.  Along the way we get some appearances by the Penguin and Commissioner Gordon, but really, the issue is simple in it’s plot.  And it’s that simplicity that make the book enjoyable.

Maleev’s art is top notch in this issue and brings me back to his earlier Batman works.  He also draws an intimidating Clayface and like I mentioned above, cleverly comes up with ways to visually show his powers.  This issue ends with a caption for next issue stating that it will be presenting the origin of Clayface.  If you’re familiar with Clayface then you’l know he’s had quite a few alter egos over the years.  Time has not been kind to this villain as countless reboots and reintroductions have muddied this character’s history  It will be nice to see if the New 52, much like this issue, can simplify his origin.

This issue presents a nice entry point into this series and a great introduction to this long-time villain.  Here’s hoping that Hurwitz and Maleev can make their next issue as solid as this one.

The goal of ComicSpectrum is to provide a one-stop reference for everything about & related to comics and comics culture.
View all posts by comicspectrum →
This entry was posted in DC and tagged Alex Maleev, Batman, Batman The Dark Knight, Clayface, DC Comics, Gregg Hurwitz, New 52. Bookmark the permalink.