Posted on September 13, 2013 by comicspectrum 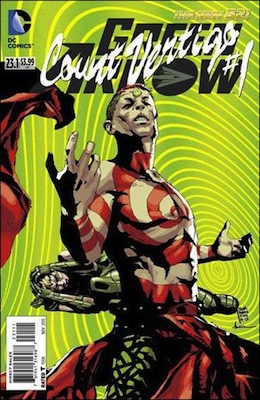 Since taking over the series in issue seventeen, writer Jeff Lemire and Andrea Sorrentino have made Green Arrow a must read book for me.  After an unsuccessful start to the series, this creative team has given Green Arrow a great legacy, and have created a rich back story that can potentially see this storyline run for quite some time.  After introducing Count Vertigo into the New 52 a few issues ago, this Villains Month issue puts the spotlight on this villain, his origin, and sets him up to me a major threat for Green Arrow going forward.

Unlike the majority of the Villains Month titles, this issue keeps the same creative team on board to tell this story.  I’m not as familiar with Count Vertigo in the pre-52 DC Universe, so although I don’t know how different or similar this origin is, I was entertained by this darker story and seeing just how he came to be.  This issue tells the tale of Count Vertigo reclaiming his homeland, and reclaiming the title of Count in his country.  It takes us through his time as a child. to him growing up in a “hospital” where he was literally made into something more than human, to him finally getting revenge on all those that did him wrong.

Although it’s a well done origin, and this complaint may be because I’ve just read the villains month Joker story,  but it is yet another villain who because of child abuse in their history, has lead them towards becoming a villain (Joker, Penguin, Two-Face, and now Count Vertigo just to name a few off the top of my head).   Again the story was well told, but to read another origin that has abuse as one of the driving factors felt a bit uninspired.

Sorrentino’s art continues to shine and is a great fit for this book.  I would compare his work to David Aja’s work on Marvel’s Iron Fist series from a few years back.  It’s a detailed, but unique line that uses color to highlight action and focal points.  His pencils have a grittiness to them that fits Green Arrow’s world, and I’m excited to see his work on this book in future issues.

Although this isn’t the strongest issue in the series since Lemire took over, it’s still well done and I was entertained throughout.  This series has a ton of potential going forward so I hope this creative team stays together for the  foreseeable future.
Reviewed by: Shawn Hoklas – shawn@comicspectrum.com
https://comicspectrum.com/ Covering the full spectrum of comics culture

The goal of ComicSpectrum is to provide a one-stop reference for everything about & related to comics and comics culture.
View all posts by comicspectrum →
This entry was posted in DC and tagged Andrea Sorrentino, Count Vertigo, DC Comics, Green Arrow, Jeff Lemire, Villains Month. Bookmark the permalink.