Posted on November 19, 2013 by comicspectrum 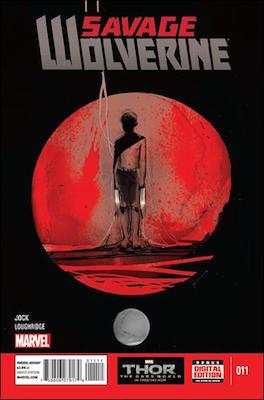 Rating: 3.5/5 – A gritty tale with matching art that ends too soon.

Savage Wolverine number eleven wraps up Jock’s three part story on the book.  His art is really a great fit for this title.  Although I can’t envision him doing an X-book, handling a solo Wolverine, and a “Savage” Wolverine at that is a great match for his style.  I wish this storyline would have ran a bit longer than it did, but Jock wraps the story with an emotional punch.  There’s still a lot of unanswered questions to this tale though, and that left me a bit frustrated with the ending.

Wolverine has been left on a mysterious alien planet that is cloning him.  One of these clones is a boy that Wolverine has befriended and ultimately ends up protecting from the forces on the planet that want the boy back.  They ultimately end up at a lab similar to that of the Weapon X lab, where Wolverine and the boy find multiple clones being grown.  It’s an exciting story, but one that abruptly ends leaving you a bit confused.  Where are they?  Who are the people running the lab?  How will Wolverine even get home?  None of these questions are answered.  Is it a fun and simple story…yes.  Will it leave those who value continuity and details perplexed and confused…yes indeed!

I knew Jock’s art would be great on this title, but I didn’t expect his style to fit Wolverine so well.  He’s not pretty to look at and it looks as though physically, he’s been through a lot.  Which we all know he has.  Jock has a gritty and unrefined line here and the colors by Lee Loughridge add to that grit.  The color palettes go from a eerie green in the labs to lots of reds and browns to highlight the alien landscape.  It’s too bad that this story only lasted three issues as I would have loved to have seen Jock handle this character a bit longer.  Hopefully he can come back again to not only provide more of his gritty art style, but to also wrap up some of the loose ends of this story.

The goal of ComicSpectrum is to provide a one-stop reference for everything about & related to comics and comics culture.
View all posts by comicspectrum →
This entry was posted in Marvel and tagged comic books, comics, Jock, Lee Loughridge, Marvel, Savage Wolverine, Wolverine. Bookmark the permalink.