Posted on November 27, 2013 by comicspectrum 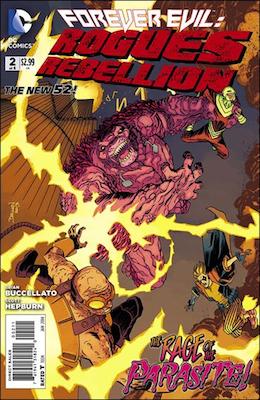 Although I wasn’t the biggest fan of the first issue of this Forever Evil mini-series, issue number two picks up the action and has you caring more about the Rogues as they go up against the Crime Syndicate.  In no way is this a necessary read to enjoy the main Forever Evil event, but it’s a fun exploration of Flash’s Rogues gallery, and is a nice showcase to relatively new artist Scott Hepburn.

Scott’s art has previously been seen on Sentinel from Marvel as well as some Dark Horse work on Star Wars and Orchid.  I wasn’t familiar with his work before, but can say that I was pleasantly surprised by his work here.  He has a nice cartoony and exaggerated style to his art that you think wouldn’t fit for these types of characters, but it actually does.  The colors in the book at times feel too muted for the art, but the overall look works.  Hepburn handles the Rogues nicely, giving each one a unique and “realistic” look.  Some of the new designs of the Rogues especially Heatwave are a step back from their original look, but Hepburn makes them all stand out.

Writer Brian Buccellato ramps up the action in this issue with the Rogues rebelling against the orders of the Crime Syndicate which has their version of Firestorm (Deathstorm) and Green Lantern (Power Ring) going after them to bring them back in line.  We get a little more insight into just how crazy Power Ring can be, we get to see the effects that Deathstorm has on the Rogue’s powers, and we’re left with a cliffhanger that will bring another villain into the mix that may lead into this series crossing over into the other Forever Evil mini-series, Arkham War.  All that and an appearance by Superman villain Parasite as well.

This is not a required read to enjoy the Forever Evil event, but it’s shaping up to be a fun series that may further define the Rogues’ place and impact in the New 52.  I’m hoping that this creative team can build on the momentum of this issue as after reading this one, I’ll be back for the rest.

The goal of ComicSpectrum is to provide a one-stop reference for everything about & related to comics and comics culture.
View all posts by comicspectrum →
This entry was posted in DC and tagged Brian Buccellato, comic books, comics, Crime Syndicate, DC Comics, Flash, Forever Evil, Forever Evil: Rogues Rebellion, Scott Hepburn. Bookmark the permalink.