Posted on February 10, 2014 by comicspectrum 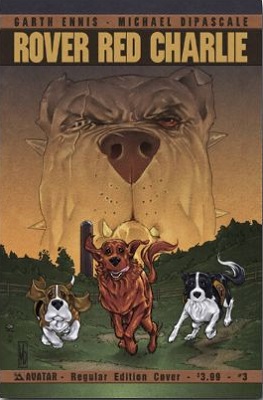 Rating: 4/5 – Homeward Bound During the (Zombie?) Apocalypse.
by ComicSpectrum reviewer Will Hessling.

Right off the bat, this is the issue I’ve been waiting for in this series. There were a number of individual things that made me smile in the first two issues, but it was hard for me to stop and get my bearings in the world. I tried to be honest in the tagline, and I want you to know that if you’re a zombie fan get back to me in a month. If you’re a dog fan (and who isn’t right?), pick this book up now!  That said, be warned that this is a Mature Readers title, as some may have guessed both from the fact it is written by Garth Ennis and that it is published by Avatar.

Before I lose you, the premise is briefly this: the main characters are dogs, and they aren’t really sure what’s going on other than that the human world is looking all apocalyptic cray cray. Their feeders (owners) got a bit of that old ultraviolence with maybe some zombie virus, they don’t really know but they’ve got to band together and do something, dammit.

We last left our adorable heroes getting the hell out of dodge after a bit of feline trickery and suspense, and now that they get a chance to catch their breath we can see them shine a bit as characters and (reluctantly) learn to feed themselves on an apparently abandoned chicken farm. But do they stay or do they go? Apart from the circumstances than unfold, the story must move on! Next issue, we move westward (long long long) towards the biggest splash and if not unaffected feeders, at least some answers! I know it sounds like at least three Stephen King books, but those are the best ones and there are DOGS!

I guess that’s a good enough segue: I’m a big fan of what I’ve read of Ennis’, which is the entirety of Preacher and a large portion of The Boys. Like King, there are some legitimate complaints, but in general both display my favorite qualities in a writer: empathy and a willingness to push boundaries, both in the realm of acceptable content and format. The ability to write a variety of characters (dogs, for example)  with understanding, especially in heavy situations, is a true testament to empathy, the crux of a good story. In that regard, this issue is what sealed it for me, as the first two were somewhat frantic yet still adorable. I’m sadly unfamiliar with Dipascale’s artwork, as this is the first experience I’ve had with it. But with visual art as well as the written word, empathy and detail are the royal couple, and I think it’s displayed in spades here. For instance, the dogs come upon a farm and learn to feed themselves in a scene where the staging of the action and small details in the execution of the art delivered a definite emotional punch while illustrating character growth & development.

The end of civilization isn’t a new premise, nor is it a new setting, but this does feel like a fresh perspective, and one that I think will pay off. Getting a slight chance to catch your breath and ask “where do we go from here?” in the third issue was a perfect break from the frantic activity of #1-2, but don’t be fooled into thinking that means there’s a lack of action. And please, give a dog a pat. They love you.

The goal of ComicSpectrum is to provide a one-stop reference for everything about & related to comics and comics culture.
View all posts by comicspectrum →
This entry was posted in Avatar and tagged Avatar, comic, comic book, dogs, Garth Ennis, Kurt Hathaway, Michael Dipascale, post-apocalyptic, Rover Red Charlie. Bookmark the permalink.