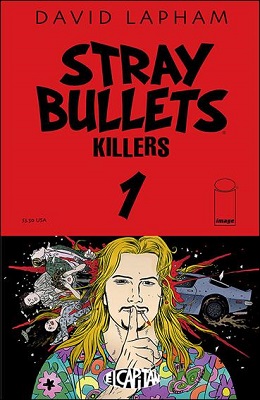 David Lapham brought us 40 issues of Stray Bullets, an edgy exploration of crime, criminals, and their lifestyle between 1995 and 2005, earning 3 Eisner nominations along the way.  He ties up that series with Issue #41, released this week, along with kicking off a new series: Stray Bullets: Killers with this #1 issue.

Stray Bullets has always been a stark exploration of life outside the law and we get more of the same here, but there is absolutely no need to have read any issues of the previous series to jump right in and enjoy this issue, you just need to enjoy reading stories that are a bit dark, violent, and sexed up.  This isn’t a gore-fest and much of the violence is implied, but it’s there and in spades.  Lapham’s fairly simplistic black & white art style adds to the mood of the story, the lack of color and heavy shading made this feel all the more real to me, as strange as that may seem.  Kind of like watching a black and white documentary, which is perhaps an apt comparison because the matter of fact style in which the story is presented makes the reader feel like they’re watching a documentarian view of a real story unfolding before us.

In this issue we follow the story of Eli, a kid who has a habit of hiding in his Dad’s trunk when he visits a local strip club and then sneaks in to catch a bit of the show himself.  Eli manages to get mixed up with Scottie, an unsavory character that hangs around said strip club, and what follows is a story that shows normal people and their normal world caught up around the edges of the criminal world.  Not pleasant by any stretch of the imagination, but it feels right.  Lapham’s story-telling has that ring of authenticity that make the story all the more enthralling.   I’m happy that Stray Bullets is back and I hope Lapham keeps issues coming at a regular clip.

The goal of ComicSpectrum is to provide a one-stop reference for everything about & related to comics and comics culture.
View all posts by comicspectrum →
This entry was posted in Image and tagged comics. comic book, Crime, David Lapham, Image, Killers, Stray Bullets. Bookmark the permalink.