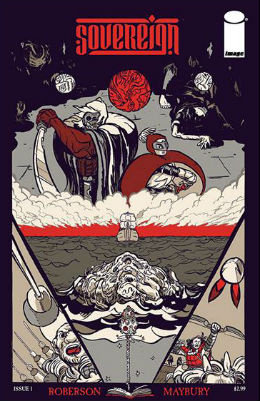 Traditional fantasy has enjoyed a resurgence in popularity at Image recently with the success of series like Rat Queens and Umbral, to name a few. Chris Roberson is known for his reputation as a world-builder, which is why it’s only fitting that he produces a fantasy series of his own with Sovereign. Based on this debut issue, the series shows some promise, though it suffers from a couple of critical flaws, in my opinion, that may turn some people off.

Sovereign is a fantasy epic that takes place in a world teeming with history, culture, and magic, not to mention the dark forces that threaten to engulf everything. Fantasy, especially high fantasy, is difficult to pull off in comics. Some writers use the microcosm approach, focusing on a few characters as they expand on the world they’re creating. Chris Roberson takes the high road by exploring the world through a wide-ranging lens, giving us three separate narratives with the aim of giving us an overview of the different peoples populating Sovereign’s world. In this approach, we are provided glimpses of how the synergy among these different people and cultures play out. In 22 pages, Chris Roberson has introduced a world that is fully realized and complex and has uncharted territories begging to be explored. This first issue has already introduced a handful of major players and it will be quite interesting to see how their individual stories will connect in the larger context of the whole series.

While the story and the world so far is interesting in itself, I feel like I had to slog through the whole issue before it connected with me (the backmatter helped). To be fair, I enjoyed it more on the second reading on account of having finally wrapped my head around the overall plot. One glaring concern I have is how none of the characters hooked me in the least. Now this criticism may be unfair; I’m sure Chris Roberson is going to flesh out the characters more in the succeeding issues. But at this juncture, the characterization felt dry, sterile, and painstakingly familiar.

I love Paul Maybury’s distinct art style (which reminds me of Paul Pope’s) and feel that its unique Euro-cartoony aesthetic is well suited to conveying the fantastical nature of the series. I, however, feel that there are parts where the storytelling may have been more clear. A more detailed approached to the art should also benefit the world-building elements that are the bread and butter of most high fantasy epics.

Chris Roberson and Paul Maybury have created in Sovereign a fantasy world that is vast, complex, and mysterious. That said, the characters were somewhat uninteresting to me in this first issue but I can’t deny that the creators have laid down a fertile ground for these characters to shine moving forward.  I’ll just have to wait and see how this plays out over the next few issues.

The goal of ComicSpectrum is to provide a one-stop reference for everything about & related to comics and comics culture.
View all posts by comicspectrum →
This entry was posted in Image and tagged Chris Roberson, comic book, comics, Fantasy, Image Comics, Paul Maybury. Bookmark the permalink.