Posted on April 6, 2014 by comicspectrum 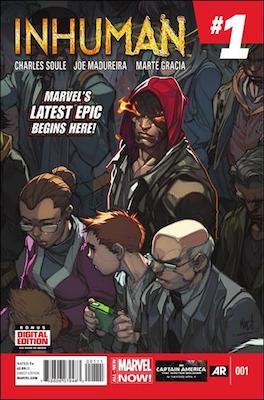 Rating: 3/5 – Good but not great, does not live up to expectations.
by ComicSpectrum reviewer Shawn Hoklas.

It’s been quite a while since Marvel has had real fan interest and excitement over the Inhumans. Since Infinity started, they’ve been talking about the Inhumans being a major component of the Marvel Universe going forward. But since Infinity ended, it feels as though that excitement and interest has been waning. Originally, writer Matt Fraction was going to be the writer on this book with a launch in January. He abruptly left the project, and because of that, Inhuman was pushed back to April with a new writer, Charles Soule. With the change in writer and extra few month, was it worth the wait? Unfortunately for me the answer was no, not really. Although there’s some bright spots, the hype around this book just didn’t live up to my expectations.  Maybe I’d have felt differently if I just walked up and read this with no prior knowledge of the changed creative team, delays, and how badly Marvel seems to want this to be “the next big thing”.

Let’s start with the art. I love artist Joe Madureira’s style. It’s dramatic, stylistic and he has a great sense of design. That being said, his work can benefit so much with an inker and brighter colors. Going back to his work on Battle Chasers and X-Men, his art looked so clean and polished. Here, although still exciting, it looks darker and flat. You see the pencil lines and cross hatching in his shading and blacks which would look much better to me with crisp black ink-lines. It’s a style preference I know, but I feel that his work here is a step back from his work years ago. That’s not to say that the art is lacking, it could just look more refined and ultimately more polished with an inker and brighter color palette.

Charles Soule’s writing is solid in this first issue, but the introduction of new characters and some of the dialogue disappointed me. In this issue we’re introduced to two main characters, Lash and Dante. Lash is an Inhuman who differs in his political thinking from Black Bolt and the royal Inhuman family. Dante is the new “hero” who emerges from the Terrigen mist cocoon and who looks as though he’ll be the main character of this series. He’s a teenager that’s doing everything right and good; but eye-rollingly right and good. He’s taking care of his pregnant sister whose husband died, as well as his mom who happens to be sick. And oh yeah…he plays in a rock band late at night so he can do all this during the day…and his name is Dante.  It felt as corny to me as this short description sounds so hopefully later issues will deepen this character’s personality.

Overall, this is an average first issue with plenty of opportunity. I’m hoping Soule and  Madureira duo can find their groove because the Inhumans really are such a rich part of Marvel lore. Unfortunately right now, they’re not getting the treatment they deserve.  My expectations for this series, especially with the Inhumans being put center stage in recent big Marvel storylines, were much higher than what I saw delivered here.  This was good, not the the “great” it needed to be.  It’s right on the cover: “Marvel’s Latest Epic Begins Here!”  This did not feel like an “Epic”.

The goal of ComicSpectrum is to provide a one-stop reference for everything about & related to comics and comics culture.
View all posts by comicspectrum →
This entry was posted in Marvel and tagged Charles Soule, comic books, comics, Inhuman, Inhumans, Joe Madureira, Marvel. Bookmark the permalink.