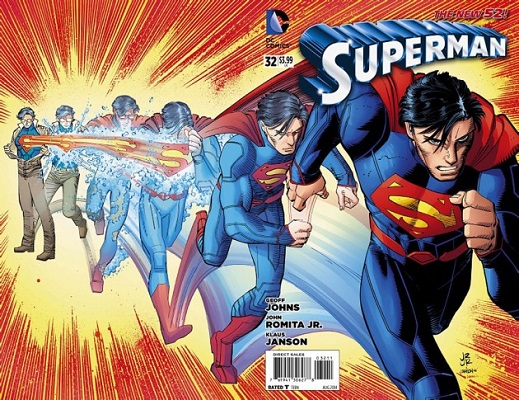 Rating: 5/5 – The Man of Steel Gets the John Romita, Jr. Treatment.
by guest reviewer Kevyn Knox.

What’s so special about Superman #32? Well, it’s the start of a brand new story arc, but that’s not all. The reason that Superman #32 is so special is because John Romita, Jr. has finally entered the world of DC Comics. An iconic Marvel artist for over thirty-five years  Romita, Jr. has now stepped out of his Marvel Universe comfort zone, and with Superman #32, has taken on his very first project for DC. Now I must admit that I was not much of a fan of Romita, Jr.’s artistic style when I was a much younger comic book reader. Since then though, the artist’s work has grown on my more mature self, and today I consider him one of the best artists currently working in the medium.

Actually, Romita, Jr. (or JRJr, as he is known) did his first work back in 1969, when at the tender age of thirteen, he contributed to his father’s Amazing Spider-Man #87 – a title he himself would have a successful on again, off again run with for nearly three decades. But this isn’t just the John Romita, Jr. monthly fan club meeting, so let’s discuss the other aspects of Superman #32. This issue also marks the debut of new Superman writer, Geoff Johns. After a successful run on Aquaman, and an even more successful one on Justice League (a title on which Johns is still the writer), Johns brings his subtle wit to the iconic character – and after this one issue, I must say it worked for me, and worked damn well.

The inherent danger with a new writer and new artist coming aboard a title like Superman, is how exactly do you do something fresh with a character who has been around for nearly eighty years? Well, the answer is probably that you cannot do much that is fresh or new with Superman, but that certainly doesn’t mean you can’t give it your all, and in doing so create something bold and intriguing. This is exactly what Geoff Johns and John Romita, Jr. do with Superman #32. I actually stopped reading the New 52 version of Superman a while back, but after picking up this latest issue, I am once again hooked. I even called my LCS and had them add the title to my pull list.

Superman #32 may not be anything groundbreaking in the history of the Man of Steel, but it may end up being an important and integral issue in years to come (take note collectors). With Johns’ wry writing, which includes the introduction of a brand new character to the DC Universe, as well as a unique juxtaposition between Clark Kent and his super alter ego, and Romita, Jr.’s classical artistic swoop (I loved the way Romita, Jr. draws Clark turning into Superman), this may be just the new direction that this seemingly tired franchise needs. I know I’m sticking around to see what happens.

The goal of ComicSpectrum is to provide a one-stop reference for everything about & related to comics and comics culture.
View all posts by comicspectrum →
This entry was posted in DC and tagged Clark Kent, comic book, comics, DC Comics, Geoff Johns, John Romita, Jr., Superman. Bookmark the permalink.