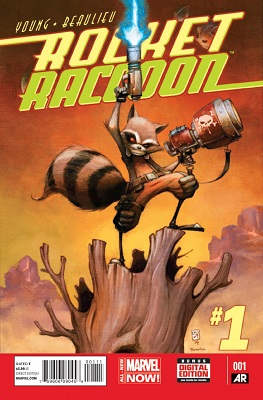 The character of Rocket Raccoon, who according to Rocket himself is not actually a raccoon, was created back in the Summer of 1975, by writer Bill Mantlo and artist Keith Giffen. Throughout the next few decades, besides a 1985 four issue limited series drawn by Mike Mignola, Rocket had pretty much fallen into obscurity, only making the occasional appearance here and there. Then came Marvel’s Annihilation crossover in 2007, and the ensuing Guardians of the Galaxy reboot, and suddenly Rocket was a rock star. And now, as one of the stars of Marvel Now’s Guardians of the Galaxy book, as well as becoming a movie star later this Summer (through the courtesy of CGI and the voice of Bradley Cooper), Rocket finds himself in a brand new issue number one.

Rocket Raccoon #1, written and drawn by Skottie Young (with color art by Jean-Francois Beaulieu) has quickly become one of my favorite titles currently on the market. I suppose that means this is going to be nothing but a rave review, but that cannot be helped. Showing Rocket in his natural element, aka the wilds of seedy space ports and the like, Young’s new comic plays like the rollicking good time one would expect from a character such as Rocket Raccoon. We even get a peek into the tiny, bushy tailed swashbuckler’s sexual proclivity. In this opening issue, we also get Rocket’s best bud Groot (“I am Groot!”), as well as cameos from the rest of his rogue-ish gang of space pirates-cum-guardians. I personally am hoping for more Groot in later issues, as I quite enjoy their Han Solo/Chewbacca riff.

With the movie coming out on August 1st, Marvel is really pushing their Guardians of the Galaxy franchise this Summer, as both Star Lord and Rocket Raccoon get their own solo titles. I’m not here to talk about Star Lord, but as for Rocket Raccoon #1, Skottie Young hands us one heck of a fun time. Nothing too deep here, but in both its jaunty and askew story and its light and airy art, this brand new Rocket series is off to a rip-roaring good start. And with the frisky Rocket in the lead, and the equally frisky Skottie Young at the helm, issues two and beyond should keep that rip-roaring good time hopping and bopping along. I know I’ve fallen in love upon first sight. How ’bout you?

The goal of ComicSpectrum is to provide a one-stop reference for everything about & related to comics and comics culture.
View all posts by comicspectrum →
This entry was posted in Marvel and tagged comic book, comics, Groot, Guardians of the Galaxy, Marvel Comics, Rocket Raccoon, Skottie Young. Bookmark the permalink.