Guardians of the Galaxy #18 (Marvel)

Posted on September 1, 2014 by comicspectrum 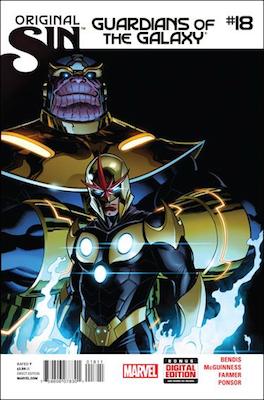 Since the Thanos Imperative came out in 2010, fans have been wondering just how Star Lord, Nova and Thanos survived the Cancerverse. At the end of that series, in order to stop the all powerful Thanos, Nova uses all the power of the Nova force while Star Lord uses the power of the Cosmic Cube to save the Guardians of the Galaxy, sacrificing themselves and trapping Thanos inside of the Cancerverse. When Star Lord came back with the relaunched Guardians team, the question of how he survived hadn’t been answered until now. As part of the Original Sin event, writer Brian Michael Bendis and Ed McGuiness set out to answer those questions in Guardians of the Galaxy number eighteen.

It’s always exciting to see McGuniess’ art, and it’s no different in this issue. Seeing his huge and bulky Thanos towering over Star Lord in his 2010 (and frankly better) costume is wonderful to look at. And of course Bendis wrote a scene that has an all out battle between Drax and Thanos which is perfectly matched for McGuiness’ style, and will remind readers of his outstanding work on the Hulk. Not surprising there’s a lot of large panels throughout this issue that showcases his art, and having Mark Farmer handle the inks is a perfect match that allows the pencils to maintain a clean and chiseled look.

When the issue opens, Gamora has tied up Star Lord in order to get him to answer the questions on just what happened with her father, and where former Nova Richard Ryder is. It’s almost a bit meta as fans have been asking this question for years and Gamora plays the role of the reader, forcing the answers that have been asked for so long. Although not everything is answered in this single issue, Bendis does a great job of setting the stage for next issue and balancing the voices of all the characters involved.

Finally learning what happened with Thanos & Nova in the Cancerverse was made as exciting as can be by Bendis and McGuiness. Readers who missed out on the 2010 series “The Thanos Imperative” where these questions originated may not care as much, but they’re still treated to some amazing McGuiness art and a quickly paced, action heavy issue. It may also lead those readers to go back and read that fun series by the writers who refreshed the cosmic side of the Marvel Universe, Dan Abnett and Andy Lanning. If you’re looking for these answers, or even if you’re not, this issue of Guardians of the Galaxy will entertain.

The goal of ComicSpectrum is to provide a one-stop reference for everything about & related to comics and comics culture.
View all posts by comicspectrum →
This entry was posted in Marvel and tagged Brian Michael Bendis, comic books, comics, Ed McGuiness, Guardians of the Galaxy, Mark Farmer, Marvel, Nova, Thanos. Bookmark the permalink.