Posted on October 8, 2014 by comicspectrum 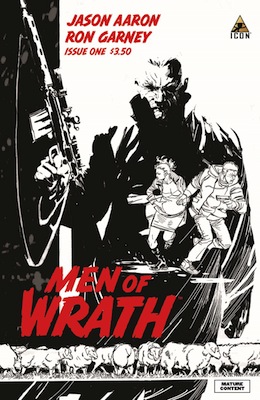 There’s a realism to the Men of Wrath that’s both dark and sad. There’s a weight to the book that after after reading, will stay with you as you wait for the next issue. Released by Marvel’s creator-owned Icon imprint, Men of Wrath is the newest creator owned series by Jason Aaron and Ron Garney. Interestingly enough, Aaron recounts how the story originated from situations that arose with his great grandfather and grandfather which gives the story a more personal flavor, again adding to that weight of the story. Men of Wrath walks us through a family, and a man, that has seen a long history of violence and how the next violent act may be his breaking point.

Ron Garney’s art is outstanding throughout and absolutely adds to the dark layer of grittiness found throughout the book. Garney uses a lot of lines to show the pain and grief on main character Ira Rath’s face. Garney uses the lines and shadows to provide a great level of depth to the character and the use of colors throughout adds to the mood. This is the type of book Garney is perfect for and it shows from the excellently framed cover through the foreboding last page. It’s a pleasure to see Garney flexing his artistic muscle on a creator owned book.

Writer Jason Aaron tells the story of Ira Rath. A hit man who comes from a family born of violence and we see those violent origins in this issue’s opening sequence. Ira isn’t a likeable character, and Aaron isn’t expecting you to find the positive in him. It adds to the realism of the book that Ira is who he is and acts the way that he does. So far there’s no soft side or endearing qualities. He’s a killer who so far has not shown any type of remorse, and from what we know about him after just one issue it would be out of character for him to do so. If this is how Ira will remain through the rest of the series remains to be seen, but Aaron has opened the door to a new type of situation in his life, and I can’t wait to see just how this cold blooded killer responds.

The goal of ComicSpectrum is to provide a one-stop reference for everything about & related to comics and comics culture.
View all posts by comicspectrum →
This entry was posted in Icon, Marvel and tagged comic books, comics, Icon, Jason Aaron, Marvel, Men of Wrath, Ron Garney. Bookmark the permalink.