Posted on November 25, 2014 by comicspectrum 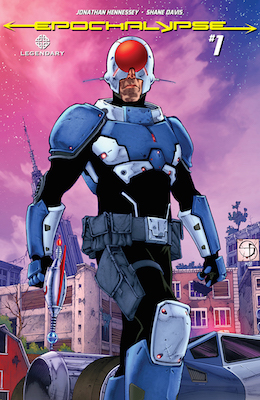 Legendary Comics, a part of the Legendary movie production company, started in 2010 and has recently been stepping up their comics releases with offerings like The Tower Chronicles (by Matt Wagner & Simon Bisley), Grant Morrison’s Annihilation, and A Town Called Dragon.  This latest new series written by Jonathan Hennessey with artist Shane Davis is called Epochalypse. It’s a series that deals heavily with time travel and a healthy dose of science fiction. With this first issue we get a glimpse of the world Hennessey is trying to create, as the big idea and concept of the series are quickly introduced to the reader.

Epochalypse opens in a small town, and in a small diner in what looks to be a rural 1940s America. The quiet setting is quickly disrupted when technology from a future time period is revealed and used, causing “resynchronizers” to barge in and set things right. These resynchronizers are time-cops that are attempting to maintain order after a yet unexplained time phenomenon has combined and merged multiple eras into one. As the story moves along we see how all the different time periods are clashing with one another, causing chaos and anomalies. The concept, although something I’ve seen before, is a solid one.  That said, the execution doesn’t necessarily make this the most compelling of reads.

Unfortunately, this first issue of Epochalypse doesn’t introduce any characters that are all that interesting and after reading it, I’d find it tough to identify any character that stands out or looks as though their story will carry forth into the next issue. This first issue is all about the big idea.  While the design and concepts of the resynchronizers are creative, there’s not a whole lot of heart or depth to the story. It feels sterile and cold and the art by Shane Davis felt the same way to me. The lack of an inker on Davis’ work gives this book a messy and unfinished feel. Davis’ work on Earth One Superman for example has a nice clean feel which is missing in Epochalypse. His backgrounds are sparse and show a lack of detail that doesn’t do anything to  give the world something more than a generic look.  I think the sci-fi elements of the time cops would have greatly benefited with the distinct lines and crisper definition provided by an inker.

Ultimately, Epochalypse read and felt to me as though it was a big budget movie without any great or meaningful performances, which is disappointing considering the talents behind the creation.  It failed to make me care about anything beyond the concept. Given more time and more issues there may be more to come come back for, but this first issue didn’t give me enough to want to revisit this world again.  That’s a failure for me in a first issue.  A #1 needs to set up characters and a world that I care about and want to revisit, an interesting concept is not enough by itself to get me to come back.

The goal of ComicSpectrum is to provide a one-stop reference for everything about & related to comics and comics culture.
View all posts by comicspectrum →
This entry was posted in Legendary and tagged comic books, comics, Epochalypse, Jonathan Hennessey, Legendary Comics, Shane Davis. Bookmark the permalink.