Posted on December 17, 2014 by comicspectrum 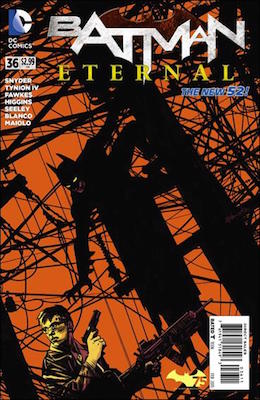 This thirty sixth issue of Batman Eternal wraps up a lot of what’s been going on over the past few months, while at the same time giving readers a cliffhanger that looks to move us into the next and possibly final arc by revealing the big villain behind everything that’s happened up till now. In addition, this issue finally gives us the motivations and origin behind Jason Bard’s intense hatred of, and desire for taking down, the Batman.

Batman Eternal has had it ups and downs, but over the course of the last ten issues or so has really found a nice rhythm to the pacing and balance. There are a lot of plots and subplots going on in this series and at times the balancing of them can tip in one direction or another, sometimes on a plot point that may not be as compelling as the other. In this issue just a couple plot points are explored and the amount of time spent on Bard and the Batman family gives it a complete and satisfying feel and seeing all of the Batman family together, even if for a limited time, shows how powerful they can be.

After an opening scene with Harper and her sick brother, we move right into the action and ultimately into Bard’s story. Penciller Fernando Blanco does a great job with pencils and layouts, especially with all the characters involved. Writers Scott Snyder, James Tynion and more’s script includes over a dozen speaking characters and Blanco gives each of them their unique look. His portrayal of Harper, although short, stands out amongst the rest and makes you wish he’d get another chance to leave his mark on the character.

The goal of ComicSpectrum is to provide a one-stop reference for everything about & related to comics and comics culture.
View all posts by comicspectrum →
This entry was posted in DC and tagged Batman, Batman Eternal, comic books, comics, DC Comics, Fernando Blanco, James Tynion, Scott Snyder. Bookmark the permalink.