Posted on March 7, 2015 by comicspectrum 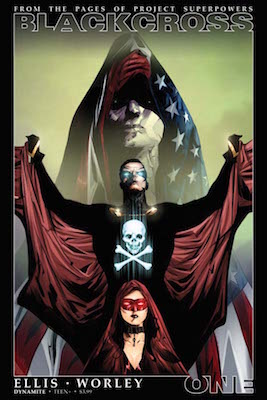 The Project Superpowers series first came about in 2008 at Dynamite under the guidance of Alex Ross and Jim Krueger who had previously worked on Marvel’s Earth X mini-series in 1999. Dynamite took popular Golden Age characters like the Fighting Yank, Daredevil and the Black Terror who have since entered public domain and gave them new life in a new interconnected universe. The series ran for a couple years with multiple characters getting their own spinoff titles, but unfortunately ran out of steam as well as readers. Dynamite is looking to relaunch the brand and characters this year and have done so with writer Warren Ellis taking the characters in an all-new direction with the first issue of Project Superpowers: Blackcross.

Blackcross serves as an introduction to these characters in a way that doesn’t put the capes and costumes first. This first issue gives you the sense that this will be a slow build into these character’s lives that include Lady Satan, The Flame and the Fighting Yank. This issue is dark from beginning to end and gives the series a much more somber and serious tone than the 2008 series. As the story opens, we see a man lighting himself on fire, quickly cutting away to detectives investigating the gruesome crime scene of a potential serial killer. Again…dark. I’m intrigued with what I’ve read so far as Ellis has done enough to grab my attention without giving away too much. You’re left with a lot of questions by the somewhat abrupt ending, but Ellis has made these characters compelling enough to make you want to read more.

Corton Worley provides the art for this first issue, and much like the story, he uses a heavier line and inks to darken the story but his pencils range in detail throughout the issue. Some panels feel detailed and rich, while others lack clarity. In a certain scene with Lady Satan, I was a bit unsure as to what was happening in the panel and I’m unclear as whether or not that was a deliberate choice from the art. Project Superpowers and its spinoffs have suffered in the past due to art that hasn’t always met my expectations. Although for the most part Worley’s art works, I’m hoping we’ll see his art improve as time goes by.

It’s nice to see this group of Golden Age characters get the spotlight again and I’m hoping that Warren Ellis can do a good job of building a stronger world for these characters to survive in so another reboot doesn’t have to happen in a few years. There’s still a lot to be answered after reading this first issue, but Ellis has started this series off slow and is looking to ease readers into this world and its potentially large cast of characters. It will now be a ‘wait and see’ on whether readers stick around for the story he has to tell.

The goal of ComicSpectrum is to provide a one-stop reference for everything about & related to comics and comics culture.
View all posts by comicspectrum →
This entry was posted in Dynamite and tagged comic books, comics, Corton Worley, Dynamite, Project Superpowers, Project Superpowers: Blackcross, Warren Ellis. Bookmark the permalink.