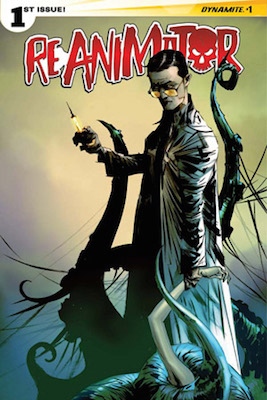 Rating: 3/5 – Reanimated, but for How Long?
by ComicSpectrum senior reviewer Shawn Hoklas.

After reviewing the first issue of Puppet Master, I thought I’d head back into the world of licensed B-movie horror comics and read the Dynamite’s first issue of Reanimator. Originally released in theaters in 1985, Re-Animator was loosely based on a H.P. Lovecraft character, but director Stuart Gordon took the violence and gore to an all new level that at times it became comedic. Actor Jeffrey Combs was perfectly cast as the driven, yet crazy Dr. Herbert West who was driven to bringing back or “re-animating” the dead. The movie became a cult classic and to this day remains one of my personal favorite horror movies.

Comics about Dr. Herbert West have been done before by the small publisher Adventure Comics. He starred in Zenescope’s Chronicles of Doctor Herbert West, and he even teamed up with Cassie Hack in Tim Seely’sHack/Slash comic. All of these series have used the character in their own way and now Dynamite is looking to bring the character back from the dead in a brand new series simply called Reanimator. In the recap page, new readers can get a bit of history about the mad doctor and after that the story moves at a rather rapid pace throwing a few Lovecraft themes into the story including Cthulhu, and having West going back to his old ways with a brand new villain. I enjoyed writer Keith Davidsen’s story and portrayal of West and although I’m a bit worried that trying to throw in Cthulhu may take away from West as the main focal point, it’s been a nice blend of both.

Where I struggled with this issue is in the art. Dynamite has contracted some wonderful cover artists and for Reanimator we get covers by Jae Lee, Francesco Francavilla and Tim Seely. They’re all fantastic covers, but Randy Valiente’s art on the interiors just didn’t connect with me. His faces all look slightly off and don’t always look similar from one panel to another and his use of heavy lines in the faces and lack of lines in backgrounds give the overall package an uneven look. His storytelling is just fine and his layouts work, but when you look closely at the details it loses the appeal.

Although I enjoyed this first issue for it’s writing and for the simple fact that Dr. Herbert West is back, I’m not sure I enjoyed it enough to come back for a second issue. The art just didn’t click with me and despite the story infusing some classic Lovecraft themes, I didn’t feel the need to see where the story heads next. Fans of Herbert West may want to pick this issue up to read new a new story about this cult classic character, but I’m not sure if this “reanimated” series will do enough to stay alive.

The goal of ComicSpectrum is to provide a one-stop reference for everything about & related to comics and comics culture.
View all posts by comicspectrum →
This entry was posted in Dynamite and tagged comic books, comics, Dr. Herbert West, Dynamite, Keith Davidsen, Randy Valiente, Reanimator. Bookmark the permalink.