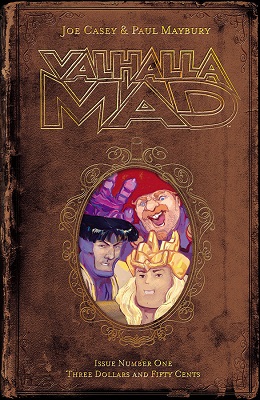 Rating: 3/5 – This Tribute to the Lee/Kirby Thor Needs to Kick It Up a Notch
by ComicSpectrum EiC Bob Bretall

Valhalla Mad seems to be Joe Casey’s loving tribute to Lee & Kirby’s Mighty Thor.  The main three characters come to Earth from their Asgard-analog realm of Viken to participate in ‘The Gluttonalia’, a bacchanalian fest of consumption that focuses in this issue on drink, but could conceivably move on to feasting as the story progresses.

The main 3 characters seemed to me to be analogs for characters from Marvel’s Thor mythos: The Mighty Thor = The Glorious Knox, Volstagg the Voluminous = Jhago the Irritator, Hogun the Grim= Greghorn the Battlebjorn.  Casey’s story in this first issue didn’t have enough meat on the bone for me (or perhaps I should say not enough mead in the flagon).  Knox, Jhago, and Greghorn come to New York, engage in some mild heroics, drink, interact with the locals a bit…and not much else.  Casey’s dialogue was a pitch-perfect recreation of Stan Lee’s pseudo-Shakespearean from early Thor comics. Paul Maybury’s art seems to be channeling Jack Kirby by way of Michael Fiffe.  That isn’t a bad thing, I enjoyed the style used for the main characters, but there was a lack of background detail in many panels that could have been enhanced to give the story more of a feeling of place.

Casey and Maybury lent the issue a definite feeling that it had been plucked out of an earlier time in comics with just enough of a modernization in dialogue and trappings from the residents of New York to give it a bit more appeal to current readers.  That said, I didn’t feel like I got a sufficient chunk of story in this debut issue to make me really want more.  Not a lot of forward story momentum, what we got was mostly atmosphere.  Fans of stories with a retro Lee/Kirby feel may enjoy this for those attributes alone and this may read better as a collected edition.  As a standalone #1 issue, this was OK, but not something I put down and thought “Wow!  I really need to get my hand on issue #2.”

The goal of ComicSpectrum is to provide a one-stop reference for everything about & related to comics and comics culture.
View all posts by comicspectrum →
This entry was posted in Image and tagged Image, Jack Kirby, Joe Casey, Stan Lee, Thor, Valhalla Mad. Bookmark the permalink.