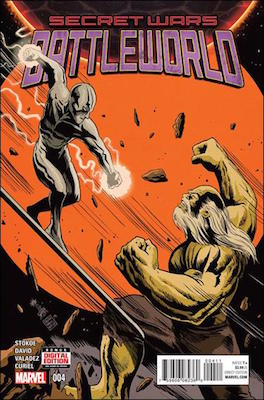 Secret Wars: Battleworld, along with Secret Wars Journal are Marvel’s anthology titles that explore Battleworld with characters that don’t necessarily have their own Secret Wars series, or domains that could use a bit more exploration. In Secret Wars: Battleworld number four, the focus for both stories is on the Silver Surfer and although I haven’t enjoyed most of what this series has had to offer despite some fantastic artists being represented, this issue was a blast due in large part to the creative talents involved including James Stokoe, Peter David and Daniel Valadez.

In the first story James Stokoe writes, draws and letters a Silver Surfer vs. Galactus story set in the domain of Egyptia. Stokoe is one of my favorite creators working today so of course I loved this story, but despite my bias, seeing the Silver Surfer and Juggernaut team up to capture Fin Fang Foom in order to quench Galactus’ hunger should be something that appeals to most Marvel fans. Fin Fang Foom is drawn more like a big lizard and less like Godzilla which works for the Egyptian influenced setting. The opening page has Silver Surfer flying away from Fin Fang Foom’s gaping mouth with a piece of meat strapped around his waist in order to bait the creature! Brilliant! Stokoe’s art is detailed throughout and similar to all of my complaints with Stokoe, I wish there was more.

In the second story, Silver Surfer needs to break into the Maestro’s trophy room in order to steal something back that the Maestro has taken. Peter David once again returns to the character he introduced so many years ago, while Daniel Valadez draws a Maestro that is both imposing, but still not nearly as powerful as a character who holds the power cosmic. Valazdez’s style is similar to a Matthew Clark which is great, although the backgrounds are sparse a story that spans just ten pages.

Overall this was may favorite issue of this series so far and I’d encourage any readers, especially Silver Surfer fans to pick up. Even with the great art on the inside, the cover by Francesco Francavilla with a Silver Surfer bearing down on the Maestro is worth it all on its own. We haven’t seen too much of Silver Surfer in Secret Wars and it looks as though there’s no plans to use him in the main series so seeing him here may be your only chance. Don’t miss it.

The goal of ComicSpectrum is to provide a one-stop reference for everything about & related to comics and comics culture.
View all posts by comicspectrum →
This entry was posted in Marvel and tagged comic books, comics, James Stokoe, Maestro, Peter David and Daniel Valadez, Secret Wars, Secret Wars: Battleworld, Silver Surfer. Bookmark the permalink.