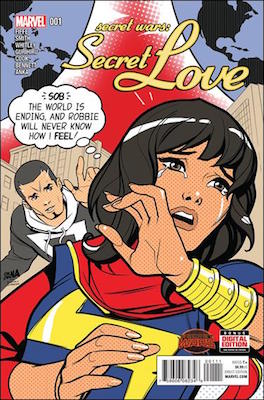 Rating: 4/5 – Love Conquers All. Even on Battleworld.
By ComicSpectrum senior reviewer Shawn Hoklas.

Romance comics are a thing of the past, especially when it comes to the big two publishers. What used to be a thriving genre back in the 1950s and 60s is now all but forgotten. As part of the Secret Wars event, Marvel has decided to revisit the world of romance comics with a one-shot titled Secret Wars: Secret Love. It’s an anthology book that tells five short stories, each with a different creative team telling stories about different couples and romances set within the Secret Wars Marvel Universe.

The first story titled Guilty Pleasure stars Daredevil and Karen Page. Creator Michel Fiffe handles the art and writing that covers a fight between Daredevil and Typhoid Mary seen from Karen’s perspective. Karen becomes jealous of Typhoid Mary when she recounts overhearing Matt mention her name while he was sleeping. As she follows Matt out because her curiosity gets the best of her, she comes to realize through some creative storytelling that she never had anything to worry about.  Michel’s choice to use Karen as the narrator was the right one as you get to see just what makes her and Matt’s relationship so special, and we see just a few of the reasons why Karen loves Matt so much. We never get to see stories like this since Karen’s tragic demise in the main Marvel Universe so reading this story was a treat! My only complaint is with the coloring. At times Fiffe uses too much white, so much so that it looks like the pages had some printing errors. Other than that it’s the most enjoyable tale of the bunch, followed closely by Misty and Danny Forever.

Misty and Danny Forever is written by Jeremy Whitley, with art by Gurihiru. It stars as the title suggests, Danny Rand and Misty Knight. Misty and Danny are having troubles in their relationship and while Misty talks about those issues with Colleen Wing, Danny talks through his issues with friends Jessica Jones and Luke Cage. It’s not until Danny and Misty decide to go to dinner when they start to confront their issues. After an awkward beginning, the dinner suddenly takes a turn for the worse from an unexpected danger, but has the fortunate effect of kicking their romance back into gear. The last page is the best part of the story, and shows how great and unique romance comics can be.

There are also stories involving Ms. Marvel and Ghost Rider which is showcased on the classic Roy Lichtenstein inspired cover, as well as a story starring Squirrel Girl and Thor, and finally a short five page tale by Katie Cook titled “Happy Ant-iversary”.

After reading this book, I missed the lack of romance comics that used to be prevalent on the stands years and years ago, and that can usually be had on the cheap in back issue bins at local conventions. As the big two publishers prevent their characters from ever finding, but more importantly keeping true love, this was a refreshing title that illustrates how love can truly conquer all.

The goal of ComicSpectrum is to provide a one-stop reference for everything about & related to comics and comics culture.
View all posts by comicspectrum →
This entry was posted in Marvel and tagged comic books, comics, Danny Rand, Daredevil, Gurihiru, Jeremy Whitley, Karen Page, Marvel, Michel Fiffe, Misty Knight, Secret Wars: Secret Love. Bookmark the permalink.