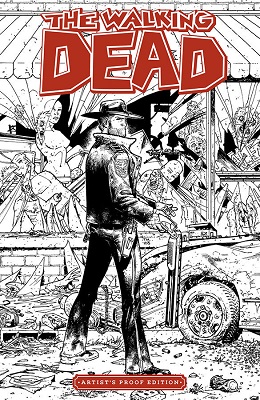 The actual story and art content of The Walking Dead #1 is an absolute 5/5 for me.  The issue has been reprinted numerous times in comic sized form and in a variety of collected editions.  What we have here is something different, and what I’m really reviewing is the package the story is presented in, not the underlying wonderful 5/5 debut issue itself.

This review is primarily my personal opinion on how they pulled off the large size format compared to the other offerings in this format on the market.  It’s OK.  If you really want to see a HUGE 11″x17″ version of Walking Dead #1, then this is absolutely going to excite you.  You can really make out the individual bit’s of beard-stubble on Rick Grimes’ face at this size.  The problem I had was that this was all I was getting.  A big version reprint of something I already had several copies of.   I read it again and the story still holds up after what is at least my 10th read through of the issue.  It’s a great start to a series and I love Tony Moore’s art.

What I like about the Artist’s Edition and Artifact Edition format pioneered by IDW is that they bring something extra to the table.  In those we get to see reproductions of the original art, which most people theoretically have never seen before.  There is the added aspect of getting the behind the scenes view on the manufacture of a comic.  A proof is usually something produced exactly as it is to be published that is checked over to make sure it’s correct for publication.  As such, this Proof Edition by it’s very nature doesn’t add any additional aspect over and above the published work, other than the size.

I’d have liked to see them add some extras into this to make it worth the price tag, such as a commentary by Robert Kirkman about the various scenes in the issue (these have to be around somewhere) or some process talk from Tony Moore about his thought process in designing the core elements of this significant series.  For $19.99 all I’m getting is a big version of the $2.99 regular sized comic. It’s a great story, but for me personally, $19.99 is a bit steep for this single issue that adds nothing additional (other than an intro by editor Sean Mackiewicz) and the covers to issues 2-6.  This is a complete “Your Mileage May Vary” item.  Someone else may think it’s the greatest thing ever, whereas I’m comparing it to the BOOM! Pen & Ink editions that cost $14.99, includes TWO issues, not one and also includes commentary by the creative team at the bottom of each page.  I’ll freely admit I like to see the “behind the scenes” aspect as opposed to just getting a big reprint of something that’s pretty much as published before.

The goal of ComicSpectrum is to provide a one-stop reference for everything about & related to comics and comics culture.
View all posts by comicspectrum →
This entry was posted in Image. Bookmark the permalink.